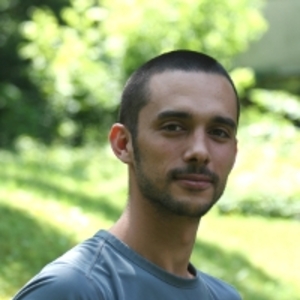 Recent human history is marked by demographic transitions characterized by declines in mortality and fertility. By influencing the variance in those fitness components, demographic transitions can affect selection on other traits. Parallel to changes in selection triggered by demography per se, relationships between fitness and anthropometric traits are also expected to change due to modification of the environment. Here we explore for the first time these two main evolutionary consequences of demographic transitions using a unique data set containing survival, fertility, and anthropometric data for thousands of women in rural Gambia from 1956–2010. We show how the demographic transition influenced directional selection on height and body mass index (BMI). We observed a change in selection for both traits mediated by variation in fertility: selection initially favored short females with high BMI values but shifted across the demographic transition to favor tall females with low BMI values. We demonstrate that these differences resulted both from changes in fitness variance that shape the strength of selection and from shifts in selective pressures triggered by environmental changes. These results suggest that demographic and environmental trends encountered by current human populations worldwide are likely to modify, but not stop, natural selection in humans.

Most theoretical research in sexual selection have studied the evolution of mate choice by indirect selection (i.e. when selection is only present on ornament and/or quality, but not directly on genes responsible for mate choice). However, empirical studies have not brought strong support to indirect selection. A less controversial finding is that choice is related to direct benefits and costs that exert a strong influence on the evolution of mate choice. We present an analytical model in which unilateral (female or male) choosiness evolves only according to such benefits and costs, i.e. only by direct sexual selection. We show that this simple model is sufficient to predict the evolution of all possible levels of choosiness when only four parameters are considered: the encounter rate, the lifetime and the length of unavailability after mating for males and females. This is because these parameters influence the trade-off between direct benefits in terms of the quality of mates and costs in terms of the quantity of mates. We further identify the sensitivity of the relative searching time (RST, i.e. the proportion of lifetime devoted to searching for mates) as a key variable allowing to predict the qualitative effect of any life history trait on the evolution of choosiness. Contrary to other predictors identified by previous models, the sensitivity of the RST encompasses the effect of all life history traits and constitutes an empirically accessible metric. The RST should allow a better understanding of the links between life history and mate choice in the future and thus provide new insights on the evolution of sex roles.

Effects of seasonal conditions on mortality and fertility in Asian elephants: implications for conservation

In highly seasonal environments, many species maximise offspring survival by reproducing at the time of year with peak resource availability. However, elephants do not have a single breeding season with females undergoing reproductive cycles throughout the year. Whether females concentrate most births on periods of maximum offspring survival is unknown, as are the proximate factors that could affect seasonal variation in birth rate. Long-term effects of birth season on patterns of mortality and fertility are also yet to be investigated. These topics are of particular importance in elephants, which are extremely long-lived and endangered, as understanding variation in mortality and reproductive success could contribute towards conservation of the species. We use individual-based longitudinal data for 2350 semi-captive logging elephants from Myanmar that occupy regions with a tropical monsoon climate, to investigate immediate and long term fertility and mortality responses to season. We supplement this long-term data with a 1 year subsample of 70 elephants for which monthly measurements of body weight, body condition and stress hormone (cortisol) levels were collected, to investigate the physiological correlates of seasonal conditions. Our results show significant variation in probability of birth by month, and an interaction between birth order and probability of birth, with higher seasonality of births in first-born individuals. There was no long-term effect of birth month on mortality, but females born in the monsoon season subsequently had earlier peak in fertility and earlier age at last reproduction in comparison to those born in the cool or dry seasons. The seasonal pattern of births did not coincide with high rainfall periods, but was rather associated with seasonal variation in workload and also matches individual level variation in cortisol in the subsample. This is a rare test of effects of early conditions on individual fitness in a non-model species.

Effects of climate on survival of Asian elephants

Climate change has intensified interest in understanding how climatic variability affects animal life histories. Despite this, little is known of their effect on survival in those species. Asian elephants (Elephas maximus) are endangered across their natural distribution, and inhabit regions often characterised by high seasonality of both temperature and rainfall. We investigated the effects of monthly climatic variation on survival and causes of death in Asian elephants of all ages and both sexes, using a unique demographic dataset of 839 semi-captive longitudinally monitored elephants from four sites in Myanmar between 1965 and 2000. Temperature had a pronounced effect on survival, with the lowest predicted survival during the hottest and coldest months in both sexes across all ages. Because during a year the elephants spent twice as long in temperatures higher than their optimum (24C) rather than temperatures below it, most deaths occurred during the “too hot” rather than the “too cold” period. Decreased survival at higher temperatures resulted partially from increased deaths from heat stroke and infectious disease, whilst the lower survival in the coldest months is associated with an increase in non-infectious diseases or poor health in general. Variation in survival was also related to rainfall with the highest survival rates during the wettest months. Our results show that even the normal-range monsoon variation in climate can exert large impact on elephant survival in Myanmar leading to large absolute differences in mortality, particularly among the youngest age classes. The persistence of a long-term trend towards higher global temperatures combined with the possibility of higher variation in temperature between seasons may pose a growing challenge to the survival of species such as the endangered Asian elephants.