The study of marine organisms is not just a job but also a pleasure.
Institute of Oceanology Polish Academy of Sciences
Genetics and Marine Biotechnology
Laboratory of Genetics of Marine Organisms
Powstancow Warszawy 55
Sopot, 81-712
Poland
Website

Characteristic of Atlantic cod (Gadus morhua, L.) populations in the Baltic Sea according to its adaptations to local environmental changes 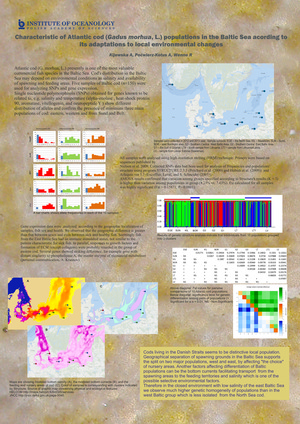 Atlantic cod (G. morhua, L.) presently is one of the most valuable commercial species in the Baltic Sea. Cod’s distribution in the Baltic Sea may depends on salinity and availability of spawning and feeding areas. Five samples of Baltic cod (n=150) were used for analyzing SNPs and genes expression. Data obtained for genes related to environmental conditions, e.g. salinity and temperature (alpha-enolase (Gm1156), heat-shock protein 90 (Hsp90), aromatase (Aro9), and neuropeptide Y (NPY)) show different distribution of alleles and suggest presence of minimum 2 populations of cod: eastern and western. The transitions area between those populations are correlated to decrease of salinity. The eastern stock is adapted to local environment, characterized by very low salinity (under 7 PSU). In fish from western Baltic Sea we observe higher genetic heterogeneity than in the eastern population, which has a very low admixture of alleles other than those correlated with low salinity. Western population is probably under strong influence of the North Sea cod’s stock. Further research should indicate if hypothesis assuming link between this differentiation and influence of local adaptations of cod is valid.