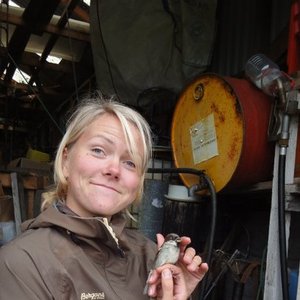 The Faculty of Natural Sciences and Technology at NTNU
Department of Biology
Centre for Biodiversity Dynamics
Høgskoleringen 5, Realfagsbygget*E3-160
Trondheim, 7491
Norway

Dispersal propensity may vary considerably between individuals in a population. Still, dispersal remains one of the least understood processes in ecology and evolution. In this study, we investigate individual variation in juvenile movement during the onset of the dispersal phase in four insular house sparrows Passer domesticus populations in northern Norway. The predictors were clutch size, hatch day, sex and morphology. The study islands differ in degree of patch isolation, configuration of suitable habitat, and characteristics of the matrix habitat. Thus, it was possible to assess the importance of such landscape features on movement. On one of the islands, movement rate was negatively related to hatch day. This pattern may be generated by age-dependent movement since early born individuals are older when the dispersal phase is initiated. However, we suggest that this relationship rather is a result of seasonal variation in the environment experienced by the nestlings, which affects their phenotype and propensity to disperse. Clutch size, sex, body size, mass and condition did not significantly explain variation in movement. On the other hand, movement rate seemed to decrease with increasing patch isolation, i.e. distance between patches and hostility of the matrix habitat. This suggests that habitat configuration is an important factor influencing movement and dispersal capacities of juvenile house sparrows.

Habitat fragmentation is a major threat to biodiversity: by reducing population sizes and gene flow between populations it affects genetic structure and effective population size (Ne), which have important implications for population dynamics and evolutionary processes. We used natural house sparrow (Passer domesticus) populations in Norway as a model system to investigate if population type (i.e. mainland or island), geographic distance, adult population size (N), immigration rate and sex ratio explained intra- and interpopulation genetic variation and Ne of fragmented populations. Data from microsatellite genotyping across multiple populations and generations was used. Our results showed that intrapopulation genetic variation was lower and the occurrence of population bottlenecks more frequent on islands than the mainland, and the general level of genetic differentiation was higher between islands than between mainland populations, but only at shorter distances. Furthermore, genetic differentiation decreased, whereas intrapopulation genetic variation and Ne/N-ratios increased with immigration rates. Both intrapopulation genetic variation and Ne increased with population size. However, genetic Ne was much larger than demographic Ne (often even >N), probably due to a greater effect of immigration on genetic than on demographic processes. In constrast, genetic Ne for the metapopulation were within the expected range (<N), suggesting that in fragmented populations even low levels of gene flow may make the total metapopulation the appropriate scale of estimation. We also developed a genome-wide 10 000 Single Nucleotide Polymorphism (SNP) chip for the house sparrow and screened individuals from four populations. This demonstrated that genome-wide marker data gave results similar to microsatellites. Our results are relevant for a better understanding of evolutionary processes and hence conservation of threatened populations.