Artificial selection for host-plant use of a seed-predator: fitness consequences, inbreeding depression, and genetic variation 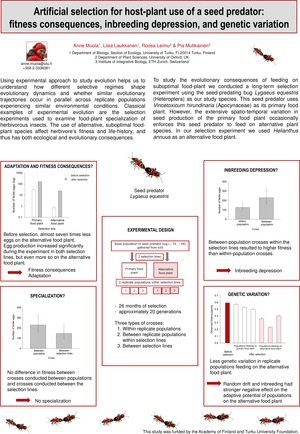 The use of alternative, suboptimal food-plant species affect herbivore’s fitness and life-history, and thus has both ecological and evolutionary consequences. Our study species, the seed predator Lygaeus equestris uses Vincetoxicum hirundinaria as its primary food plant. However, extensive spatio-temporal variation in seed production of V. hirundinaria occasionally enforces L. equestris to feed on alternative plant species. We conducted a long-term selection experiment to test if this seed predator is able to adapt to a suboptimal food-plant species in more than 20 generations. We measured fitness and adaptation in terms of increase in reproductive output. We replicated the populations within the selection lines to separate the effects of selection from random drift and conducted intra- and inter-population crosses to detect inbreeding and population differentiation. Furthermore, we analysed how population genetic structure changed during the selection experiment. We found that although the fitness of L. equestris that had fed on the alternative food plant was almost seven times lower than when feeding on V. hirundinaria, it increased significantly during the experiment indicating selection for higher fitness on the alternative food plant. Besides selection, random drift affected adaptation to the alternative food plant as indicated by differences in fitness among the replicate populations. Inter-population crosses within the selection lines resulted to higher fitness than intra-population crosses indicating inbreeding depression. To further underline the negative effects of random drift and inbreeding on adaptive potential of populations, we found that the level of genetic variation was lower in replicate populations feeding on the alternative food plant. Our study is novel in that it combines the analysis of population genetic structure to a more traditional selection experiment to examine host-plant specialization of herbivorous insects.

Interactive effects of inbreeding in a specialized plant-herbivore interaction