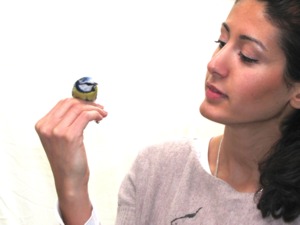 Mimicry evolution: it's in the eye of the beholder 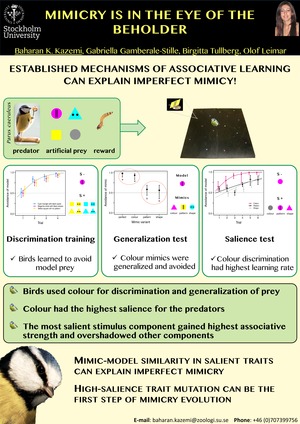 During mimicry evolution the perceived mimic-model similarity increases and the evolutionary direction could be strongly influenced by predators judgement of similarity. Mimicry evolution is thus more likely to commence in traits that predators use prior to others to categorise prey. If they use such feature-based categorisation, a similarity with the model in such a feature should lead to increased survival. I tested the idea by studying if birds attend to specific features of prey appearance when they learn to discriminate and generalise between them. I used wild Blue Tits as predators and tested the colour, pattern and shape dimension of artificial prey. The birds first learned to avoid a specific model prey appearance and then performed a generalisation test with new mimics that shared one dimension with the model. I found that colour mimics were strongly avoided whereas pattern and shape mimics were attacked. This shows that the birds primarily attended to a single feature, colour, and thus generalised between models and colour mimics. In a separate experiment I found that the birds learned the colour dimension significantly quicker than pattern and shape, showing that colour is a significantly more salient trait to them in terms of learning and categorisation.