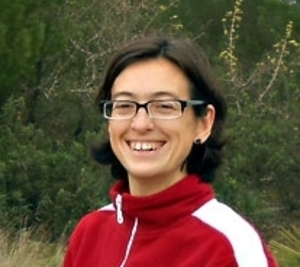 The fitness impact of seed fecundity in a long-lived understory shrub: a 12-year study 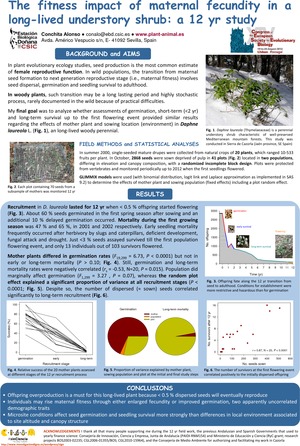 The transition between seed and adult stages in plant populations involves seed dispersal, germination and seedling survival the seedling/juvenile stage being frequently the most vulnerable phase. In woody plants, the transition from seedlings to reproductives may be a long lasting one and consequently highly stochastic process, which has been rarely documented in the wild because of practical difficulties. However, only disparity among individuals differing in a certain trait in next-generation reproductive offspring will allow natural selection to occur. In this study, I followed the fate of ca. 2900 sown seeds of the long-lived, evergreen shrub Daphne laureola, under natural conditions up to their first reproductive event twelve years after sowing. In summer 2000, single-seeded mature drupes were collected from natural crops of 18 mother plants in Cazorla mountains (SE Spain). Seeds were deprived of the pulp and sown in 41 plots according to a split-plot design. Plots were located in two sites differing in abiotic conditions associated with differences in elevation and canopy composition. Germination was relatively high (ca. 70 %) and occurred primarily in the first spring season after sowing, although delayed germination occurred in ca. 10 %. Mortality during the first growing season was high (ca. 55 %) with almost all dead seedlings having experienced herbivory by invertebrates (slugs and caterpillars) at early development stages. Remarkably, only 13 individuals had reached reproductive stage in 2012 suggesting that conditions for establishment were more stringent than conditions for germination. Here, I will analyse whether germination, short-term (1-2 years) and long-term (11 years) survival assessments provided similar results regarding the effects of mother plant (genetics) and sowing location (environment) in this understory shrub characteristic of well-preserved Mediterranean mountain forests.