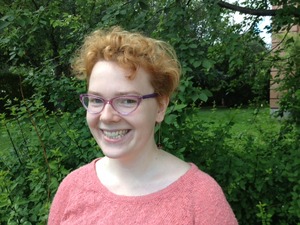 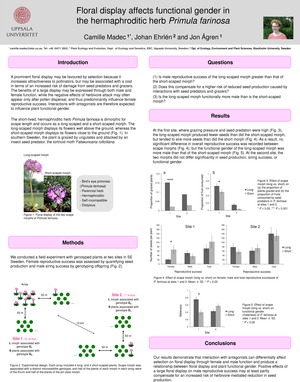 A prominent floral display may be favoured by selection because it increases attractiveness to pollinators, but may be associated with a cost in terms of an increased risk of damage from seed predators and grazers. While the benefits of a large display may be expressed through both male and female function, the negative effects of herbivore attack may often appear only after pollen dispersal, and thus predominantly influence female reproductive success. The short-lived, hermaphroditic herb Primula farinosa is dimorphic for scape length and occurs as a long-scaped and a short-scaped morph. The long-scaped morph displays its flowers well above the ground, whereas the short-scaped morph displays its flowers close to the ground. We conducted a field experiment with genotyped plants at two sites in SE Sweden to examine whether male reproductive success of the long-scaped morph is greater than that of the short-scaped morph, and whether this may compensate for a higher risk of reduced seed production caused by interactions with seed predators and grazers. Female reproductive success was assessed by quantifying seed production and male siring success by genotyping offspring. At the first site, where grazing pressure and seed predation were high, the long-scaped morph sired significantly more offspring but produced fewer seeds than did the short-scaped morph. At the second site, the two morphs did not differ significantly in siring success or seed production. The results demonstrate that interactions with mutualists and antagonists can differentially affect selection on floral display through male and female function and produce a relationship between floral display and plant functional gender. Positive effects of a large floral display on male reproductive success may at least partly compensate for an increased risk of herbivore-mediated reduction in seed production.