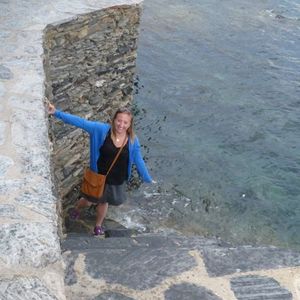 A comprehensive understanding of the speciation process at a genomic level requires investigation at different stages in the evolutionary continuum from onset to completion and hybrid zones provide such opportunities. The European crow hybrid zone between the all black carrion crow (Corvus [c.] corone) and grey coated hooded crow (C. [c.] cornix) is a classic example of early stage speciation characterized by a lack of neutral genetic divergence, limited evidence of postzygotic reproductive isolation, and the rapid divergence of distinct plumage characteristics that mediate strong assortative mating. Here we took a population genomic approach to characterize genomic divergence between color morphs to identify genes with major effect on speciation and potential ”magic traits” involved in the earliest stages of divergence. Initial analyses of 66 re-sequenced genomes reveal a heterogeneous landscape of genome divergence with 4 narrow regions of the genome that show significant differentiation between the grey hooded crow populations from Sweden and Poland with respect to black carrion crow populations from Germany and Spain. These regions are potentially associated with structural variants (i.e. a pericentric inversion on chromosome 18), as well as differentially expressed candidate genes within the melanogenic pathway. However, fixed differences detected in these genomic regions in contrast to no divergence of the coding sequence of MC1R or intron regions linked to primary candidate genes points to potential cis-regulatory elements driving the initial divergence of expression profiles and plumage characteristics. Comparison of outlier regions with both a white coated and all black outgroup species (C. torquatus & C. brachyrhynchos, respectively) will determine whether the divergence is the result of standing genetic variation or derived mutations.

Plumage colour differences within and between species are characteristic of many organisms and are particularly conspicuous in birds. The evolution of such colour polymorphisms, their contribution to prezygotic isolation and their general role in speciation has been a central theme in the evolutionary sciences. The hybrid zone between carrion and hooded crows (Corvus [c.] corone and C. [c.] cornix) is a prime example. The zone appears to have been maintained by strong assortative mating mediated by plumage colour for at least a century. The discrete segregation in colouration strongly contrasts with a surprising lack of genetic differentiation. Here, we aim at identifying the genetic basis of this colour polymorphism and assess its role in the speciation process. To achieve this goal, we generated an annotated draft reference sequence of one Hooded crow individual which we then used a backbone for population genomic analyses. We further conducted an extensive (RNAseq) gene expression experiment under common garden conditions focusing on differential gene expression of genes expressed in active feather follicles. The combination of the population genomic data and detailed information from the gene expression experiment provides a powerful approach to identify the genetic cause of colouration differences and its consequence for local genomic divergence between this pair of incipient species.