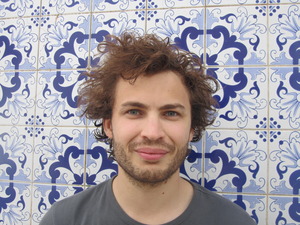 Inferring a realistic demographic model from genetic data is an important challenge to gain insights into the historical events during the speciation process and to detect the molecular signature of selection along genomes. Recent advances in divergence population genetics have reported that speciation in face of gene flow occurred more frequently than theoretically expected, but the approaches used rarely account for genome wide heterogeneity (GWH) in introgression rates. However, GWH is expected as a consequence of variation in effects of natural selection on migrant alleles. We investigated the impact of GWH on the inference of divergence with gene flow between two cryptic species of the marine model Ciona intestinalis. These morphologically indistinguishable entities are highly diverged molecular-wise, but evidence of hybridisation has been reported in both laboratory and field studies. We examined polymorphism and divergence patterns across 852 genes scattered throughout the C. intestinalis genome. We compared various speciation models and statistically tested for GWH under the ABC framework. Our results demonstrate the presence of significant extents of gene flow resulting from a recent secondary contact between the two gene pools, after more than 3My of divergence in isolation. The inferred rates of introgression are relatively low, highly variable across loci and mostly unidirectional, which is consistent with the idea that numerous genetic incompatibilities have accumulated over time throughout the genomes of these highly-diverged species and that introgression could be adaptive. A genomic map of the level of gene flow identified two islands of introgression, i.e. large genome regions of unidirectional introgression. This study clarifies the history and degree of isolation of two cryptic and partially sympatric model species, and provides a methodological framework for the study of GWH in introgression rates at various stages of the speciation process.