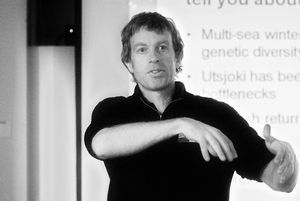 Annotated genes and non-annotated genomes: use of model organism gene annotation information for understanding the molecular basis of traits of ecological and evolutionary importance 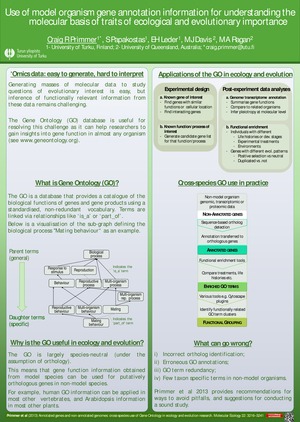 Recent advances in molecular technologies have opened up unprecedented opportunities for evolutionary biologists and ecologists to better understand the molecular basis of traits of ecological and evolutionary importance in almost any organism. Nevertheless, reliable and systematic inference of functionally relevant information from these masses of data remains challenging. In my poster, I will highlight how the Gene Ontology (GO) database can be of use in meeting this challenge. The GO provides a largely species-neutral source of information on the molecular function, biological role and cellular location of tens of thousands of gene products. As it is designed to be species neutral, the GO is well suited for cross-species use i.e. functional annotation derived from model organisms can be transferred to inferred orthologs in newly sequenced species. In other words, the GO can provide gene annotation information for species with non-annotated genomes. I will highlight the both the strengths and the current weaknesses of using GO for enhancing the understanding of molecular function in ecologically relevant species and present some examples of its use for evolutionary contexts

A genome-wide association study (GWAS) of age at maturity in Atlantic salmon: implications for conservation and management

In wild Atlantic salmon (Salmo salar), there is variation in the age at maturity within and between populations, as individuals can spend anywhere between one and five years feeding at sea before returning, often to their natal river, to spawn. The larger, late-maturing ‘multi-sea winter’ (MSW) individuals that have spent multiple years at sea prior to maturation are highly sought after by anglers. This life-history strategy has also been shown to be important from a biodiversity perspective, thus creating a management conflict. Knowledge of the genetic basis of age at maturity would provide a foundation for developing effective management strategies for conservation of this important life-history trait. The Atlantic salmon population of the Teno River in northern Finland is arguably the most biodiverse salmon population in the world from a life history strategy perspective, with more than 100 different life history strategies (combinations of river years, years at sea and repeat spawning) being recorded. It also has immense socioeconomic importance, both due to fishing tourism (15,000 anglers visit this remote region annually) as well as local and indigenous fisheries, with up to 60,000 individuals (60% of the annual run of ascending salmon) caught annually. Alarmingly, the proportion of late-maturing MSW fish has been declining in recent decades. A long term scale archive combined with the availability of an Atlantic salmon 7K Illumina® iSelect SNP-array provided an opportunity to conduct a genome-wide association study (GWAS) to identify genomic regions associated with age at maturity. By implementing genome-wide relatedness information to account for unexpected population structure, we identified several genomic regions harbouring loci significantly associated with age at maturity. The implications of the findings for conducting GWAS in wild populations, as well as for the practical management and conservation of exploited salmon populations will be presented.

Ray-finned fishes (actinopterygii) have successfully colonized almost all aquatic habitats, exploiting a wide range of temperature, salinity, oxygen level and hydrostatic pressure conditions. Temperature in particular is a strong environmental constraint driving adaptation, and several recent studies have detected signals of selection on mitochondrial genome along latitudinal or altitudinal gradients as well as an interaction between mitochondrial and nuclear genotypes in determining metabolic performance. Numerous actinopterygii complete mitochondrial genomes are now available and crystallographic structures have been determined for most of the 13 mitochondrial DNA-encoded proteins. Concomitantly, studies of the structural differences between mesophilic and thermophilic (optimal growth temperature > 50°C) microorganisms have provided useful insights into the general evolutionary patterns leading to increased protein thermal stability. In this context, we used all currently available actinopterygii mitochondrial genomes in relation with an environmental database (FishBase) to test whether there was an association between the thermal stability of mtDNA-encoded proteins and the environmental temperature commonly inhabited by the species. Several predictors of thermal stability (local structural entropy, amino acid compositional bias, hydrophobicity) were used with and without prior partitioning of the protein sequences into transmembrane and exposed regions. Phylogenetically independent contrasts were calculated to test the relationship between stability and environmental temperature. Signatures of increased predicted thermal stability with increasing environmental temperature were detected for some but not all of the proteins, thus suggesting that environmental temperature constrains the evolution of mtDNA-encoded protein stability in ray-finned fishes but that this constraint is not homogeneous among proteins.

Metabolic thermal adaptation is crucial for maintaining the necessary energy balance for survival in the face of seasonal temperature fluctuations. The plasticity of the thermal response and its potential for evolutionary adaptation are expected to differ between populations exposed to different thermal regimes. To understand how metabolic thermal responses differ in recently (< 11,000 years) isolated populations, we studied 4 populations of the nine-spined stickleback (Pungitius pungitius) from marine locations and spring-fed ponds from the Baltic region. We hypothesized that populations from cold, thermally stable ponds and from marine, thermally more variable locations would differ in their metabolic compensation thermal response. We acclimated wild-caught fish to 6, 11 and 19°C in the lab under constant photoperiod and measured their resting and active metabolic rates in order to determine their aerobic scope. Liver weight was used as a proxy for energy reserves. The fish from the coldest and most stable pond population exhibited complete temperature compensation for their aerobic scope while the marine populations underwent metabolic depression in the cold. Aerobic scopes were identical between all populations at 19°C. Marine populations had larger hepatosomatic index at all temperatures, with cold acclimation accentuating this effect. Our results suggest that differential energy storage and metabolism adaptations occurred in those populations, with the marine populations developing a winter-tolerance strategy while the cold pond population could potentially have a winter-exploitation strategy. This work demonstrates the metabolic versatility of the nine-spined stickleback and provide a potential energetic framework for the previously observed adaptations in energy-dependent traits in other nine-spined stickleback populations.

Ongoing climate change will expose populations to altered thermal regimens, which are likely to include more frequent and higher temperature maxima. Whether and how a resident population can withstand or adapt to these new conditions will depend on the genetic architecture underlying responses to temperature changes. This includes both coding genes and the regulatory regions that govern expression of these genes. Recent advances enabling the quantification of transcription levels for a large number of genes and the genotyping of many thousands of genetic markers throughout the genome, together with novel statistical methods, are facilitating the identification of such regulatory regions via expression quantitative trait locus (eQTL) analysis.

The threespine stickleback (Gasterosteus aculeatus) is an important model organism in evolutionary biology. The species occurs as resident populations in a wide range of habitats with different thermal profiles. We used sticklebacks derived from the Baltic coast of Finland to identify and localize eQTLs underlying changes in gene expression in response to thermal stress. Experimental subjects comprised 600 individuals in 30 sib–halfsib families, half of which were subject to a thermal challenge immediately prior to tissue collection. Liver mRNA expression was subsequently quantified using Agilent custom microarrays. Over 2000 genes were found to be differentially expressed between control and treatment groups. Genotyping of the families by sequencing on the Illumina platform, in combination with the existing G. aculeatus genome, was used to generate a linkage map that included over 10,000 SNPs. This enabled us to characterize and explore the regulatory networks underlying these changes in gene expression.

Understanding how genetic and environmental factors influence the response of the host against parasites in controlled laboratory conditions has been an active area of research for decades. However, relatively little is known about the physiological effects and genetic mechanisms of the host defence in wild populations in their natural environment. Here, we measured the effect of the proliferative kidney disease-causing parasite T . bryosalmonae on the physiology and performance of the host, wild brown trout. We estimated the effect of the parasite on host physiology by quantifying kidney swollennes, hematocrit and different white blood cell parameters in 0+ juvenile brown trout and tested whether PKD have negative effect on upper thermal tolerance and aerobic scope of the host. We also constructed a pedigree using microsatellite markers and used animal models to estimate the heritabity of the physiological traits. Finally, we used a high-throughput SNP chip and association mapping approach to identify genomic regions that affect the severity of PKD. This work demonstrates how integration of physiological, quantitative genetic and genomic approaches can reveal novel insights about disease in wild.