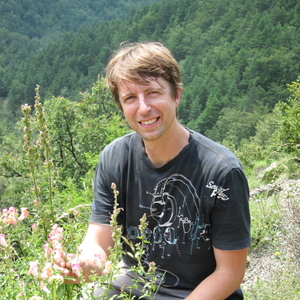 Selection on flower colour genes in a snapdragron hybrid zone

A major goal of evolutionary biology is to understand how diverging populations become distinct species. Although much progress has been made in identifying genes that contribute towards population divergence and speciation, direct measurements of their effect on fitness in nature are often difficult to obtain. We are studying the evolutionary dynamics of speciation between two subspecies of Antirrhinum (snapdragons) with different flower colours (yellow and magenta). In this system, two major loci control flower colour and give rise to six colour phenotypes across a narrow hybrid zone. Surprisingly, these species are visited by the same array of pollinators (large bees). This raises the question of how these genes initially arose and spread and how populations are currently maintained in the face of gene flow. To better understand the role of flower colour genes in speciation we are using an integrated approach to examine the role of selection, epistasis, drift and gene flow over multiple time scales. To examine short and long-term evolutionary processes we are using SSR and SNP markers for individuals sampled across the hybrid zone as well as sequence variation with Restriction-Associated DNA sequencing (RAD) data from allopatric populations. The existence of a steep cline (~280m wide) for flower colour and diagnostic markers linked to the underlying genes, suggests selection is acting against some of the hybrid colour phenotypes. Significant heterozygote deficit at small spatial scales (<30m) and an excess of parental phenotypes also suggests assortative mating may play a role in maintaining the hybrid zone. Initial results from RAD tags indicate that the highest regions of divergence (Fst) between allopatric populations are located near the genes that control flower colour. Taken together, these results suggest that selection is acting on the flower colour genes, likely through pollinators discriminating among the flower colour phenotypes within the hybrid zone.

To understand how selection establishes reproductive barriers between populations, we need to identify the loci regulating the selected traits. Knowing that, how are sets of co-adapted alleles maintained when gene-flow occurs between distinct populations? One view is that genetic linkage maintains fit haplotypes, resulting in a genomic signature of selection as an “island of divergence”. To address these issues we study a hybrid zone between two Antirrhinum species with different flower colours. Various phenotypes result from this hybridization, but are restricted to a narrow region (~1km) and do not spread to the parental populations. A gene regulating magenta flower pigmentation, ROS, was found to have a steep cline correlated with a flower colour cline, suggesting this trait is under selection. A second tightly-linked locus also regulating this trait, EL, has now been mapped. A genomic comparison of diversity between the Antirrhinum species shows a signature of selection in the region containing both loci (ca. 180kb~0.9cM). Surprisingly, this “island of divergence” includes non-shared and shared polymorphisms, questioning how the parental ROS-EL haplotypes are maintained in face of gene-flow. By genotyping plants across the hybrid zone we show that even though LD between them is high (r~0.9), recombinants do occur (~12% in the zone). This suggests that gene-flow between the two populations was enough to break fixed differences within the “island”, resulting in a rugged divergence profile that includes fixed polymorphisms (linked to the functional loci) interspersed with shared ones. To our knowledge this is one of a few cases where a cluster of loci under selection has been finely mapped and its behaviour studied at a population-level. This analysis empirically demonstrates the significant impact gene-flow has in breaking associations of clusters of putatively co-adapted alleles, providing key insights to our interpretation of genomic signatures of selection.