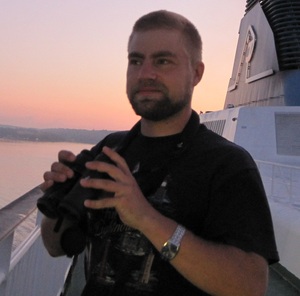 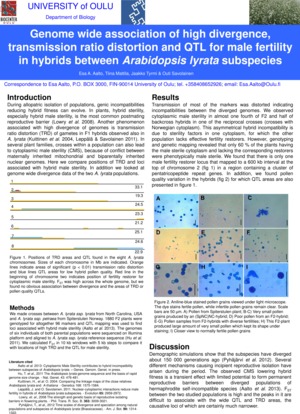 Crosses between evolutionarily diverged populations may result in sterile hybrids, which can eventually lead to speciation. In plants, early evolution of male sterility can be caused by incompatibilities between maternally and bi-parentally inherited genomes. Another phenomenon associated with high divergence of genomes is distorted transmission of gametes of F1 hybrids. Genome wide divergence data allow us to examine whether transmission ratio distortion and the regions affecting hybrid male fertility co-locate with islands of high divergence. We examined post pollination reproductive isolation between subspecies of the perennial outcrossing self-incompatible Lyrate rockcress (Arabidopsis lyrata) by crossing experiments between two highly diverged populations. We grew large reciprocal F2 progenies and three generations of backcrosses. F2 plants were genotyped for altogether 96 markers and the genomes of their parents were sequenced on Illumina platform. Transmission of most of the markers was distorted indicating incompatibilities between the diverged genomes. We observed cytoplasmic male sterility in almost one fourth of F2 and half of backcross hybrids in one of the reciprocal crosses. This asymmetrical hybrid incompatibility is due to sterility factors in one cytoplasm, for which the other population lacks effective fertility restorers. However, genotyping and genetic mapping revealed that only 60 % of the plants having the male sterile cytoplasm and lacking the corresponding restorers were phenotypically male sterile. We found that there is only one male fertility restorer locus that mapped to a 600 kb interval at the top of chromosome 2 in a region containing a cluster of pentatricopeptide repeat genes. At the same genomic region, there is also high sequence divergence between populations. We also compare genome wide transmission ratio distortion to divergence and discuss the role of cytoplasm and genomic conflict in incipient speciation.

CONSTANS is highly prone to natural selection in Arabidopsis lyrata

We examined the evolution and diversity of genes related to flowering time, an important adaptive trait in plants, and a set of unrelated reference genes in the perennial Arabidopsis lyrata in several populations in Europe and North America. Among the 38 loci, CONSTANS, one of the central flowering time genes, was the only which had experienced species-wide adaptive evolution when compared to A. thaliana, as shown by multilocus MK analysis. This was consistent with earlier result of selection on this gene in A. thaliana (Bustamante et al. 2002), and of the rapid evolution of this gene in Brassicaceae (Lagercranz & Axelsson 2000). The CONSTANS gene also was highly differentiated between the widespread A. lyrata populations (Fst=0.78). Further, an association analysis suggested a role in governing fitness in an experimental field site at the University of Oulu. Thus, we found CONSTANS gene to be adaptively important in all studied time levels of natural selection. Likely selection on flowering time, may often target the CONSTANS gene.