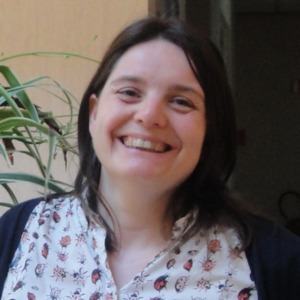 The interplay between ecological and genomic adaptation is at the heart of evolutionary processes. If we consider that species evolve as groups of genomes adapting to particular ecological niches, shifts to a new ecological niche should be connected with the adaptation and differentiation of a genome population to this particular niche. To study how ecological adaptation affects genomes simultaneously at both ecological and whole genome levels, we focussed on large DNA viruses because their ecological niches are mostly defined by their hosts. Among viruses, baculoviruses are uniquely transmitted between insect hosts as groups of genomes, which sets them further apart for studying the effect of niches on populations. We investigated this question of ecological genomic adaptation by an experimental evolution approach on a baculovirus. As their infectious particles contain >100 virions each enclosing a genome of 134 kb, baculoviruses foster the maintenance of high genetic diversity, as we discovered from ultra-deep illumina sequencing of the AcMNPV wild-type isolate. We found different level of polymorphism: few SNPs at high frequency located in essential genes involved in replication, transcription and transmission, and low frequency SNPs in every position, suggesting any potentially beneficial mutation is already present within the population. We used this diverse virus population to perform experimental evolution in two lepidopteran host species Trichoplusia ni and Spodoptera exigua. We performed 10 infection cycles in 10 replicate lines. We analysed the evolution of virulence phenotypes in parallel to resequencing the evolved progeny lines.

Cotesia sesamiae are small parasitoid wasps parasitizing over twenty lepidopteran African stem borer species. It is thought that local adaptation to these different host species is mediated by their symbiotic bracoviruses (BVs). BVs derive from large DNA viruses and have been stably integrated in the wasp genome. The wasp use BVs to introduce ~150 genes in parasitized caterpillars, inducing immunosuppression and allowing wasp larval development. In C. sesamiae, different alleles of the CrV1 BV gene explain parasitic success in a particular host species. Nonetheless, other BV genes could be involved in wasp local adaptation or specialization to their lepidopteran hosts. To investigate this, we focused on the BV genome of 25 samples representative of different African C. sesamiae populations. As we worked with tiny organisms, we used custom-made targeted sequence capture to enrich our sequence library in BV genomes (257 kb) prior to Illumina resequencing. This proved to be a very efficient technique as we obtained high target coverage (1100X) and high percentage of mapped reads (90%) for all C. sesamiae populations and for the more distant outgroups. First, we used population genetics tools to identify regions under strong divergent selection by comparing nucleotide diversity (π) and genetic differentiation (FST) along the BV genome and between populations. Secondly, we used a phylogenomic approach to establish the evolutionary relationships between these populations using BV sequence of three outgroup species. Third, comparative genomics helped to assess the effects of particular mutations and identify sites evolving under positive selection. Last, we compared the molecular evolution of all orthologous BV genes both between and within populations and measured the rate of non-synonymous versus synonymous substitutions under a branch-site evolutionary model. Overall our results indicate that different BV genes are at play depending on local host context.

Cotesia species (Hymenoptera, Braconidae) are endoparasitoids of Lepidoptera larvae. Their virulence is mediated by a polyDNA symbiotic virus (Bracoviridae) of which genome is integrated to the wasp chromosomes. In Cotesia sesamiae Cameron it has been shown that host pressure exerts positive selection on the virulence gene CrV1, and that the evolution of the bracovirus genome is associated to cases of host specialization (Gauthier et al., this meeting). Here we studied the species status of C. sesamiae host races. It attacks a wide range of stemborer larvae, including pests of maize and sorghum in sub-saharan Africa. Our study was based on a geographically and ecologically diverse sampling. A phylogenetic analysis conducted on seven-gene concatenated tree revealed two major clades. One has a diversified ecological niche and gathers host races associated with distinct CrV1 allelic variants, supporting the hypothesis that conserved gene flow between populations maintains their ability to shift between hosts. In contrary, the second clade is invariably associated with one host species, Sesamia nonagrioides, on one host plant, Typha domingiensis. It harbors a unique CrV1 allele, namely Cs Snona, not present in the first clade. Further investigations allowed us to give the status of a new species, labelled C. typhae, to this lineage. (i) Cross mating experiments revealed reproductive isolation from two populations of the other lineage, as well as from C. flavipes, a sister species of C. sesamiae; (ii) Experimental analysis of parasitic success showed that C. typhae was the only lineage virulent against S. nonagrioides. Hence, C. typhae constitutes a new species in the C. flavipes complex, potentially resulting from sympatric speciation. It is characterized by reliable ecological niche and molecular markers. It represents a potential biological control agent for southern Europe where S. nonagrioides is a major pest of maize crops.