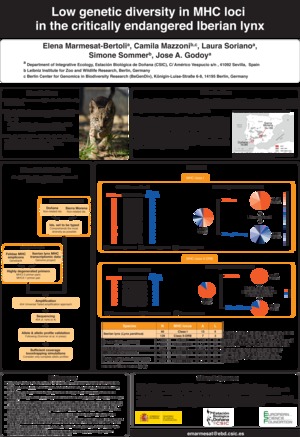 A central premise in Conservation Genetics is that genetic erosion occurring in declining populations reduces adaptive potential and compromises viability. However, functional variation is seldom assessed in endangered populations. Here we use the Major Histocompatibility Complex class I and II-DRB loci (MHC) as functional model loci to study the impact of the decline on Iberian lynx genetic variation, a species for which previous genetic studies have shown a strong decline in the neutral variation and concomitant fitness reductions.

We genotyped the most variable exon of MHC I and II-DRB genes in 300 individuals from the two extant wild and the captive populations using a 454 platform and a new pipeline analysis. We used transcriptomic and genomic data for primer design and expression analysis. Captive individuals, having a well-established pedigree, allowed us to infer composite haplotypes and to analyse segregation. We found a total of 13 and 6 alleles probably corresponding to 7 and 3 loci for MHCI and MHCII, respectively. One allele shows signals of pseudogenization and not all other alleles were confirmed to be expressed. In the case of MHCII, most individuals in the smallest and less diverse Doñana population show a three-allele profile, consistent with homozygosity at all three loci. Additionally global diversity levels for MCH_I and II are low compared to other felid species.

Our results suggest that the immune response in remnant Iberian lynx populations may be compromised and that the severe reduction and fragmentation may have eroded not only the neutral, but also the functional genomic diversity, thus compromising the evolutionary adaptive potential of the species.