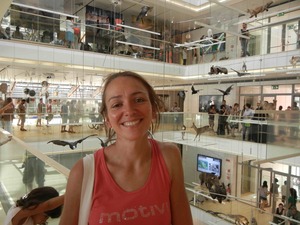 Alpine ecosystems are facing rapid human-induced environmental changes and more knowledge on the adaptive potential of keystone Alpine tree species is needed. This study addresses the question as to whether geographical isolation (IBD) or environmental-driven selection (IBA) is more important for adaptation, based on SNP genotyping of silver fir and larch natural populations in the Alps and Apennines. Genetic structure was tested for both geographical and environmental groups, using AMOVA. For each species, environmental groups were defined using climate variables selected from a multiple factor analysis. Complementary methods were applied to identify outliers based on these groups, and to test for IBD vs. IBA. AMOVA showed weak but significant genetic structure for both group types. Among the potential outliers detected, up to four loci were found for geographical groups and up to seven for environmental groups. A stronger effect of IBD than IBA was found in both species; nevertheless, once spatial effects were removed, elevation in fir and precipitation in larch were relevant factors explaining genetic structure. In Alpine trees, environmental-driven selection and geographical-isolation are both important for adaptation. This process is advantaged by large amount of seeds and strong selection at early stages of establishment.