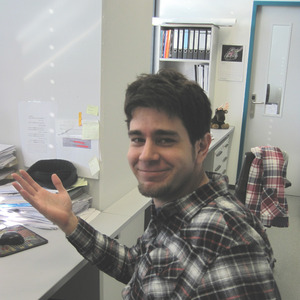 Color polymorphisms are tractable traits that are directly related to various crucial evolutionary processes including adaptation and speciation. The genetic basis of coloration has been the focus for genetic and evolutionary research for over a century. Despite this interest, few studies have successfully unraveled the genetic basis of color polymorphisms in natural populations; and the processes governing the origin, spread and maintenance of polychromatism are still poorly understood. The Midas cichlids of the crater lakes in Nicaragua are an excellent system to investigate the maintenance of a conspicuous color polymorphism and its role in speciation-with-gene flow. Midas cichlids are characterized by a conspicuous polychromatism: most individuals are grayish with dark bars, while some exhibit a gold coloration. The color morphs mate assortatively and have been suggested to be undergoing divergence in sympatry. Here, we explore the genetics of this trait using a combination of genetic mapping and next-generation sequencing technologies. The results show that a simple mendelian genetic architecture can underlie sympatric divergence, and might even constitute evidence for one-gene models of speciation. We further show that the onset of the phenotype is variable and dosage dependent (i.e homozygotes have earlier onset). This observation is of interest to understanding the fitness landscapes under predation pressure in the wild. The genomic region that harbors the gold locus is genomically unstable and characterized by the presence of tandem duplications and innumerous indels. The genes in the region are related to immune function, coloration and social affiliation. Patterns of association found in population-based fine-mapping using SNP genotyping and targeted-enrichment NGS are complex and compatible with multiple origins. These results indicate a role of mutation rate, hitch-hiking and pleiotropy in the maintenance of this conspicuous color polymorphism.

The spectacular species richness of cichlid fishes and their famous diversity in morphology, coloration, and behaviour have made them a well-known textbook model for the study of speciation and adaptive evolution. In their natural environment, hypertrophic lip cichlids forage predominantly in rocky crevices. It has been hypothesized that this foraging behaviour associated with mechanical stress caused by friction could result in larger lips through phenotypic plasticity. In order to test how strongly phenotypic plasticity can influence the size and development of lips, we conducted a split design experiment in Nicaraguan cichlids and a series of breeding experiments on both Nicaraguan and African cichlids. Two months old full-sibs of A. labiatus (thick-lipped) and A. citrinellus (thin-lipped) were randomly assigned into two feeding groups, a control group (C) where food was released into the water column and a treatment group (T) fed with the same amount and type of food, but fixed to substrates in order to induce mechanical stress on lips. Treatment fish in the thick-lipped species had highly significant larger lips. Interestingly, no differentiation was found between treatment and control groups for the thin-lipped species. The thick-lipped species developed hypertrophic lips in both groups and these were significantly larger in both groups when compared to the thin-lipped species demonstrating a genetic component. The genetic component was further investigated by analyzing the phenotypic segregation in F1 and F2 fish obtained from a cross of thick- and thin-lipped species. F1 of both African and Nicaraguan crosses had intermediate lips and F2s exhibited large phenotypic variance, consistent with a polygenic basis. These results show that not only a genetic, but also a plastic component is involved in the development of hypertrophic lips in cichlids and opens the exciting possibility that plasticity is selected for in recent thick-lipped species.

Body coloration is polymorphic in many species. It is subject to both natural selection (e.g. cryptic coloration) and sexual selection (e.g. male nuptial coloration). Two extraordinary features of Cichlids are their enormous diversity in coloration and their rapid rates of diversification. Sexual selection on coloration has been proposed to be one of the major forces driving their explosive speciation rates, which makes them an ideal system to study the effects of body coloration on speciation processes. Most of the Nicaraguan lakes are inhabited by two color morphs of Midas cichlids: a barred dark morph, which represents the majority of individuals (~90%), and a gold morph (7 - 10%). All individuals have the normal phenotype at early stages of their life but some lose their dark coloration and become gold. Gold and normal fish mate assortatively and genetic divergence of neutral markers occurs between the two morphs. All of which suggests a role of this trait in the process of incipient speciation. In this study, we characterize the architecture of the genomic region that harbors the causal gold polymorphism. The interval was reduced to approximately 60 kb and it, as well as the flanking regions, shows strong evidence of genomic instability. This includes several indels of various sizes, gene duplications and chromosomal rearrangements. Lineage-specific, tandemly duplicated genes have been identified, some of which show signs of pseudogenization and selection. Comparative genomic analysis of the region indicates the presence of cichlid-specific and perhaps even Midas-specific chromosomal rearrangements. Regions of genomic instability have been proposed to have an impact on speciation due to altered recombination and mutation rates. The present study illustrates the architecture of an unstable genomic region that might underlie incipient sympatric speciation in Nicaraguan Midas cichlids.

How can a sexually selected exaggerated male trait be reduced or lost?

What drives the evolution of male specific conspicuous traits? Sexual selection is known to act via female preference for exceptional traits. However, using phylogenomic (RAD sequencing) analysis we have shown that a definitive example of such a trait, the exaggerated caudal fin (or sword) specific to Xiphophorus fish, is likely to have been lost during the evolutionary history of this genus. If such a trait is subject to strong sexual selection, how can it be lost? To address these questions we used the green swordtail fish, Xiphophorus hellerii, whose sword is a textbook example of female association preferences. Classic studies have demonstrated through association tests that females prefer males with long swords, and even species whose males lack this trait prefer males with an artificial sword over their own non-sworded males. Here, we extend these findings by using a natural population setting, where males and females could freely interact and choose mates, to show that female preferences are highly likely to involve an array of male traits. By conducting independent replicate experiments we find no significant difference in paternity success between long and short sworded males, and in any given replicate females tended to choose the same male. Further, by genotyping sperm stored in the female ovary we provide the first indication that post-copulatory sexual selection may play a role in the paternity success of different males. Previous studies have largely painted a picture of the sword as the main determiner of reproductive success. Under this scenario, the repeated loss of the sword is paradoxical. By considering male sexiness as a more multivariate trait these losses can be explained by changes in the environment and fluctuations in population size.

Determining the genetic bases of phenotypic adaptation and ultimately speciation is one of the major quests in evolutionary biology. Cichlid fish species flocks are a prime example of recent rapid radiations often associated with adaptive phenotypic divergence from a common ancestor in a short period of time. In these fishes divergence in eco-morphological traits, including body shape, colour, lips and jaws, are thought to underpin their diversification. The Midas cichlid species complex (Amphilophus) of Nicaragua provides one of the few known examples of sympatric speciation, where species have rapidly evolved different eco-morphologies in young crater lakes. In this study we use SNP marker genotypes generated using ddRAD sequencing and a combination of morphometric analyses to identify significant QTLs in ecologically divergent cichlid species with different body morphs: an elongated limnetic species (A. zaliosus) and a high-bodied benthic species (A. astorquii) inhabiting lake Apoyo. A total of 453 informative RAD markers were identified in 240 F2 hybrids. These markers were used to construct a genetic map for which 25 linkage groups were resolved. We found 27 segregating SNPs linked to QTLs. The QTL-linked genomic regions were annotated to identify genes that likely contribute to divergence in body shape in benthic and limnetic Midas cichlid sympatric species. These results underline the effectiveness of RAD-Seq as a tool for rapid and efficient generation of QTL-targeted and genome-wide marker data and a promising method for investigating the genomic bases of divergence in ecologically relevant traits.