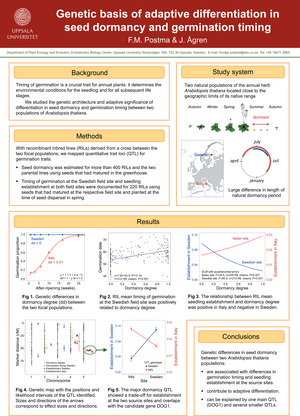 Timing of germination is expected to influence plant fitness strongly, because it determines not only the environmental conditions for the emerging seedling but also sets the context for all subsequent life stages. We studied the genomic architecture and adaptive significance of differentiation in seed dormancy and germination timing between two natural populations of the annual herb Arabidopsis thaliana located close to the geographic limits of the native range (northern Sweden and central Italy). With recombinant inbred lines (RILs) derived from a cross between the two focal populations, we mapped QTL for germination traits. First, seed dormancy was estimated for more than 400 RILs and the two parental lines using seeds that had matured in the greenhouse. Second, the timing of germination at the Swedish field site and seedling establishment at both field sites were documented for 220 RILs and the two parental lines using seeds matured at the respective field site and planted at the time of seed dispersal in spring. The Italian genotype produced seeds with a markedly stronger dormancy and germinated later at the Swedish field site than did the Swedish genotype. At both field sites, the local genotype outperformed the non-local genotype in terms of seedling establishment. In Italy, seed dormancy was positively correlated with RIL establishment success, while in Sweden this relationship was negative. Of the 11 QTL identified, one affected all three germination traits (dormancy, timing, establishment). This QTL had a huge effect size compared to the other detected QTL, and co-locates with the known dormancy gene DOG1. The results demonstrate that genetically based differences in seed dormancy are associated with differences in timing of germination and successful seedling establishment at the sites of the source populations, and thereby contribute to adaptive differentiation among natural populations of A. thaliana.