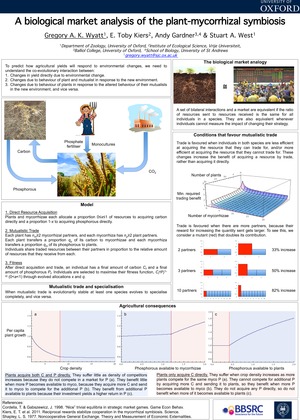 Mutualistic cooperation can easily be stabilized when one partner is in relative control, interacts with a number of potential partners from the other species, and has some mechanism to enforce cooperation. In contrast, in the mycorrhizal mutualism, there is no apparent partner ‘in control’. Here, both partners may interact with multiple symbionts simultaneously. This complex series of interactions means that neither partner determines the terms of the interaction. Biological market theory models offer an approach for modeling and conceptualising such coevolutionary interactions between multiple partners. However, previous biological market models have made two assumptions that limit the extent to which they can be applied to mutualisms such as that between plants and fungi. First, they assumed that markets consist of an infinite number of partners. This prevents any partner having the bargaining power that comes from being one of a limited number of partners. Second, they assumed that cooperation is stable, rather than asking when it would be stable. Consequently, we have developed and analysed a market model without these assumptions and thus more readily applicable to the mycorrhizal mutualism. First, we found that whether or not individuals engage in mutualistic trade depends both qualitatively and quantitatively upon the number of partners of each species, as well as their degree of specialisation. Second, we found that, in a market model, mutualistic trade implies that at least one species relies completely on the other for at least one resource. Finally, we found that incorporating bargaining power may mean that many of the potential gains from trade are not exploited.