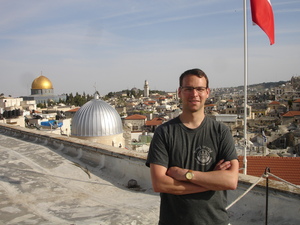 Novel infectious diseases have been emerging at an alarming rate over the last few decades, with sometimes devastating consequences for public health. Prime examples include the rise of HIV or the increasing incidences of tuberculosis and MRSA. To understand the origin of these novel strains, detailed knowledge is required on the adaptive evolution underlying successful establishment and spread of emergent strains in new host populations. Both theoretical studies and occasional epidemiological reports identified host immune state as a key factor in disease emergence. However, the importance of this factor has not been studied in a rigorous experimental framework that explicitly allows for long-term evolution.

Pseudomonas aeruginosa is a widespread Gram-negative bacterium found in water, soil, plants and animals. Its diverse array of virulence factors allows it to establish and proliferate in environments ranging from plant roots to the human respiratory tract. It plays an important role in chronic infections such as in cystic fibrosis (CF), and is the most commonly isolated nosocomial bacterium. Pseudomonads naturally possess multiple response mechanisms against antimicrobial treatments granting it resistance against the most commonly used antibiotics. They range from efflux pump systems and complex genetic regulation to intricate social behaviours like biofilm formation or swarming. However, to date, we lack detailed understanding of the relative importance of each of these mechanisms and their interplay during resistance evolution. Thus, our study uses controlled evolution experiments to evaluate in how far different resistance mechanisms are selectively favored throughout P.aeruginosa adaptation to different types of antibiotics.

Our work highlights the potential influence of intra-specific variations among the sexes in immunocompetence on host-parasite coevolution. In particular, the Red Queen hypothesis proposes that coevolving parasites select for outcrossing in the host. Outcrossing relies on males, which often show lower immune investment as a consequence of sexual selection. Here, we show that such sex-specific variation in immunity significantly interferes with parasite-mediated selection. Two independent coevolution experiments with Caenorhabditis elegans and its microparasite Bacillus thuringiensis produced a decreased yet stable frequency of outcrossing male hosts. Subsequent tests verified that male C. elegans suffered from a direct selective disadvantage. In the presence of its microparasite, males showed lower survival, decreased sexual activity, and altered escape behavior. Each of these responses can reduce outcrossing frequencies. At the same time, males also offered an indirect selective benefit, because male-mediated outcrossing increased offspring resistance. As such intra-specific variations in immunity are widespread among animals, the resulting interference of opposing selective constraints may impose a fundamental limit to host adaptation during antagonistic coevolution.