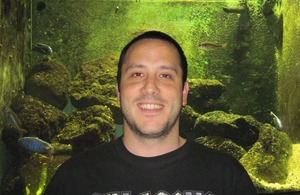 The spectacular species richness of cichlid fishes and their famous diversity in morphology, coloration, and behaviour have made them a well-known textbook model for the study of speciation and adaptive evolution. In their natural environment, hypertrophic lip cichlids forage predominantly in rocky crevices. It has been hypothesized that this foraging behaviour associated with mechanical stress caused by friction could result in larger lips through phenotypic plasticity. In order to test how strongly phenotypic plasticity can influence the size and development of lips, we conducted a split design experiment in Nicaraguan cichlids and a series of breeding experiments on both Nicaraguan and African cichlids. Two months old full-sibs of A. labiatus (thick-lipped) and A. citrinellus (thin-lipped) were randomly assigned into two feeding groups, a control group (C) where food was released into the water column and a treatment group (T) fed with the same amount and type of food, but fixed to substrates in order to induce mechanical stress on lips. Treatment fish in the thick-lipped species had highly significant larger lips. Interestingly, no differentiation was found between treatment and control groups for the thin-lipped species. The thick-lipped species developed hypertrophic lips in both groups and these were significantly larger in both groups when compared to the thin-lipped species demonstrating a genetic component. The genetic component was further investigated by analyzing the phenotypic segregation in F1 and F2 fish obtained from a cross of thick- and thin-lipped species. F1 of both African and Nicaraguan crosses had intermediate lips and F2s exhibited large phenotypic variance, consistent with a polygenic basis. These results show that not only a genetic, but also a plastic component is involved in the development of hypertrophic lips in cichlids and opens the exciting possibility that plasticity is selected for in recent thick-lipped species.

Understanding the factors that drive and constrain populations to build up reproductive barriers and diverge is a key objective in evolutionary biology. Based on the framework of ecological speciation, next-generation-sequencing tools allow researchers today to investigate the dynamics of divergent selection and gene flow at a genomic level. Although this endeavor has been very fruitful for our understanding of speciation, no generalities have emerged so far and more empirical data from different taxonomic groups and ecological settings are needed. One of the main questions, for example, concerns the importance of the temporal succession of restricted genomic islands of divergence (divergence hitchhiking) versus a genome-wide progression of divergence (genome hitchhiking). Having colonized several isolated crater lakes from the same source population, Midas cichlid fishes (Amphilophus cf. citrinellus) in Nicaragua have diverged into convergent ecotypes recently, repeatedly, and in sympatry; features that make this an interesting setting for studying the genomics of ecological speciation. Furthermore, the partly repeated and probably still ongoing radiations are at different stages of divergence, which makes this system one of the rare cases to investigate the temporal succession of this process. Here we investigate genomic divergence in the entire Midas cichlid species complex using double-digest restriction-site-associated-DNA sequencing (ddRAD-seq). With 700 individuals our data set covers the whole currently known diversity of the species complex and allows for a multitude of meaningful population genomic comparisons. By mapping the thousands of generated RAD loci on a preliminary Midas cichlid genome assembly, we are able to address questions concerning the genomic landscape of repeated but differently progressed speciation events and provide candidate regions that might harbor the genetic basis of adaptation and speciation in the Midas species cichlid complex.