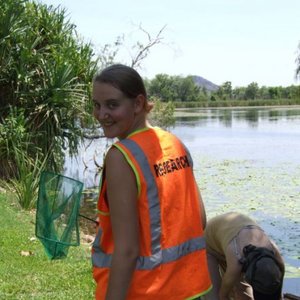 Reproductive isolation is central to the speciation process and efficient species recognition is crucial to prevent the waste of time, energy and resources in low quality matings. Ideally, animal communication systems are tuned to environmental conditions, facilitating the selection of appropriate mates. However, breeding individuals often face heterogeneous conditions some of which may reduce preclude efficient species recognition and enhance the hybridization rate. Recent work suggested that information may be reliably transferred under a broad set of environmental conditions by resorting to multimodal communication (backup hypothesis). These predictions may not hold for species experiencing recent environmental changes but they may do for species experiencing long term stochasticity of their sensory environment. The two newts Lissotriton vulgaris and L. helveticus extensively overlap in Europe. Mating involves tactile, visual and chemical components. We investigated how the sensory environment affected species recognition and whether the use of multimodal sexual communication supported the backup hypothesis. We showed that despite large phenotypic differences, hybridization is common at the site level. We also found that visual and olfactory communication contributed to recognition under ideal transmission conditions but that visual recognition was drastically reduced under poor, but realistic, visual conditions. We thus tested whether olfactory recognition would maintain a high recognition level regardless of visual conditions. We also tested whether the visual environment experienced during development influences visual perception in order to determine the level of constraints for the olfactory channel. These results show that variable sensory environments may contribute to long-term hybridization. They also suggest that selection against hybrids may generate divergent habitat selection and allow overlaps only in habitats allowing efficient recognition.