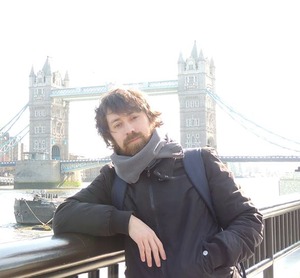 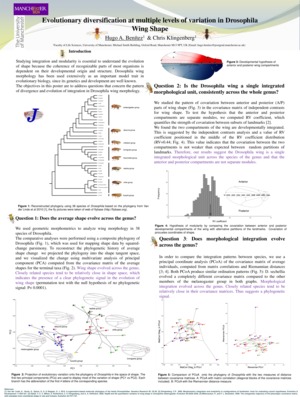 Studying integration and modularity is essential to understand the evolution of shape because the coherence of recognizable parts of most organisms is dependent on their developmental origin and structure. Drosophila wing morphology has been used extensively as an important model trait in evolutionary biology, since its genetics and development are well known. The aim of the present study is to address questions related to the evolution and developmental process of the wing shape architecture. Specifically, the questions are: 1- Are the Drosophila wings a single integrated morphological unit consistently in all the species groups across the whole genus? 2- Does morphological integration evolve across the genus? 3- Is there any evolutionary integration in the Drosophila wing? To study these morphological changes we used geometric morphometrics as a tool for analyzing shape variation and its covariation between the anterior and posterior (A/P) compartments of the wing and to compare the different covariance matrices between species. Moreover, we also used comparative methods for mapping the shape data onto the phylogeny. The analyses show, on the one hand, strong differences between the species of this genus. Indeed, the modularity test for the A/P wing compartments showed that they are not independent in all the species studied, confirming previous results for D. melanogaster at large scale. On the other hand, mapping the variation of covariance matrices onto the phylogeny shows the pattern of evolution of integration in the genus. This study has helped to answer questions related to the evolutionary process of the Drosophila wing shape and to show that the A/P wing compartments are not separate modules of variation. We have also found a clear evolutionary integration into all the different traits of wing shape. We can conclude that the wing shape shows strong internal covariation, and also that the integration process has evolved in the genus.