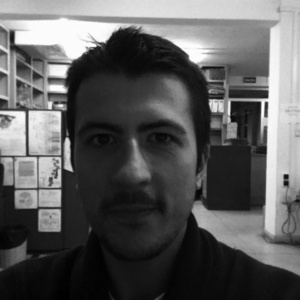 Systematics in presence of reticulation and incomplete lineage sorting: the case of Linaria sect. Supinae 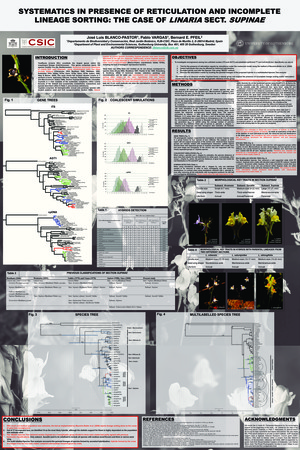 We examined the phylogenetic history of Linaria with special emphasis on the Mediterranean sect. Supinae (44 species). We revealed extensive highly supported incongruence among two nuclear (ITS, AGT1) and two plastid regions (rpl32-trnLUAG, trnS-trnG). Coalescent simulations, a hybrid detection test and species tree inference in BEAST revealed that incomplete lineage sorting and hybridization may both be responsible for the incongruent pattern observed. Additionally, we present a multilabelled BEAST species tree as an alternative approach that allows the possibility of observing multiple placements in the species tree for the same taxa. That permitted the incorporation of processes such as hybridization within the tree while not violating the assumptions of the *BEAST model. This methodology is presented as a functional tool to disclose the evolutionary history of species complexes that have experienced both hybridization and incomplete lineage sorting. The drastic climatic events that have occurred in the Mediterranean since the late Miocene, including the Quaternary-type climatic oscillations, may have made both processes highly recurrent in the Mediterranean flora.

The role of flower specialization in plant speciation and evolution remains controversial. Here we analyzed the evolution of flower traits restricting the access to pollinators in the bifid toadflaxes (Linaria sect. Versicolores), a monophyletic group of c. 30 species and subspecies with highly specialized corollas. A time-calibrated phylogeny based on both nuclear and plastid DNA sequences was obtained using a coalescent-based method, and flower morphology was characterized by means of morphometric analyses. Using recently-developed methods, directional trends in morphological traits and trait-dependent diversification rates were jointly analyzed, and morphological shifts were reconstructed along the phylogeny. Our results indicated that a restrictive character state (narrow corolla tube) may be ancestral to Linaria sect. Versicolores. After its early loss in the most species-rich clade, this character state has been convergently reacquired in multiple lineages of this clade in recent times, yet it has exerted a negative influence on diversification rates. Comparative analyses and pollinator surveys suggest that the narrow- and broad-tubed flowers are evolutionary optima representing divergent strategies of pollen placement on nectar-feeding insects. We therefore suggest that opposing individual-level and species-level selection pressures may have driven the evolution of pollinator-restrictive traits in bifid toadflaxes.

Antirrhinum L. (snapdragons; c. 25 spp.) is an Old World plant genus primarily distributed in the western Mediterranean basin. Antirrhinum exhibits many interesting ecological and morphological features. Active research has been undertaken on pollination biology and biogeography and some species (mainly Antirrhinum majus L.) have been traditionally much appreciated due to its ornamental value as well as to its importance as a model system for molecular floral development. In spite of this research attention, and regardless the extensive efforts made, the phylogenetic relationships within the genus are far from being well resolved. Previous phylogenetic analyses failed to infer species relationships within the genus. The difficulty in defining species boundaries and the low phylogenetic resolution suggested an early rapid diversification of the genus. Under this scenario, processes obscuring phylogenetic reconstruction such as hybridization/introgression and/or incomplete lineage sorting are likely to have occurred. Moreover, hybridization processes in field and under controlled conditions were previously reported in several Antirrhinum species. In order to obtain accurate phylogenetic relationships within Antirrhinum we obtained allelic data from two low-copy nuclear genes and three plastid loci. We carried out coalescent-based simulations to distinguish hybridization from coalescent stochasticity. Additionally, we incorporated hybrids/introgressed species in the multispecies coalescent model by using a multilabelling approach in which a lineage of hybrid origin is represented with two sources of parental contribution. This methodology allowed the accurate reconstruction of complex evolutionary patterns that have occurred in this group of species extensively used for evolutionary research.