Avian maternal transfer of antibodies: are they affecting the specific immune response of their chicks? 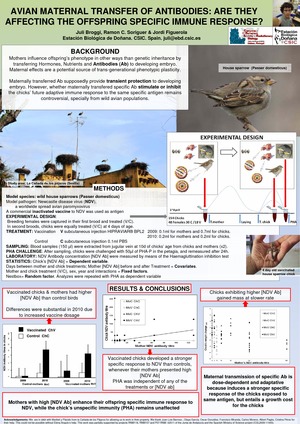 Avian parents influence their offspring’s phenotypes by providing different sorts of parental care. Mothers may transfer a variety of elements through the yolk sack that can affect the embryo’s development. Among these elements supplied, mothers transfer antibodies that provide transient adaptive immune protection to the chick. However, whether such transient specific immunity is enhancing the chicks’ subsequent immune response to the same specific immune challenge remains controversial. We explored whether mother’s specific immune response to Newcastle disease virus (NDV) affected their chick’s subsequent response to the same antigen. We studied a wild breeding population of house sparrow (Passer domesticus) in southern Spain. We captured 57 breeding females in two consecutive breeding events: 29 were vaccinated against NDV in their first brood, and the rest were sham-controlled. Chicks on their second brood were equally treated, the concentration of NDV antibodies (NDV-Ab) was measured, and the phytohaemaggulutinin-induced immune response (PHA) assayed from all before fledging. Leukocyte profile, antioxidative status and total protein concentration from blood was measured from all individuals. Both vaccinated mothers and chicks presented higher NDV-Ab levels than control individuals. Chicks’s level of NDV-Ab was marginally affected by their mother’s treatment, which was further confirmed when the level of maternal NDV-Ab was taken into consideration. Chicks challenged with NDV vaccine developed a stronger specific response whenever their mothers presented high levels of NDV-Ab. However, chick’s PHA response was unaffected by none of the treatments, nor the mothers’ condition (NDV-Ab, leukocyte profiles or antioxidative status) in any way. Our results suggest that house sparrow mothers transfer specific NDV-Ab, which help their chicks to respond more strongly when challenged with the same antigen, leaving other immune responses unaffected.