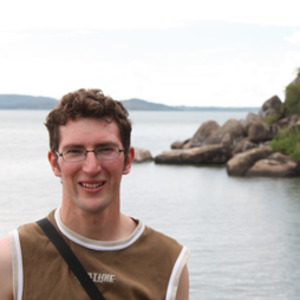 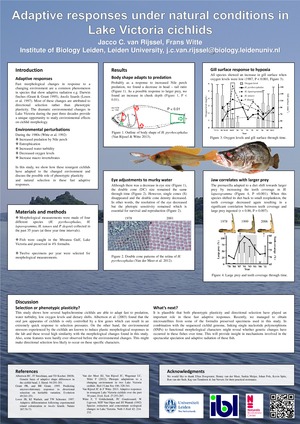 Fast morphological changes in response to a changing environment are a common phenomenon in species that show adaptive radiation (e.g. Darwin finches, Anolis lizards). Most of these changes are attributed to directional selection rather than phenotypic plasticity. Lately, phenotypic plasticity and its role in adaptive radiation has attracted the attention of evolutionary biologists. The dramatic ecological changes in Lake Victoria during the past three decades provide a unique opportunity to study environmental effects on cichlid morphology. The environmental stressors are known to induce plastic responses in the lab but the mechanism behind adaptive responses under natural conditions remains obscure. The ecological changes in the lake include the upsurge of the predatory Nile perch, an increase of water turbidity, a decrease of dissolved oxygen (DO) levels and a diet shift of zooplanktivorous cichlids towards larger and more robust prey. We used ecological and morphological data collected in the past 30 years (at three year time intervals) to see how the environment has affected the morphology of the haplochromine cichlids. We found fast adaptive responses in four different haplochromines. In response to predation we found that the head-tail ratio decreased, probably to increase burst swimming speed. Unexpectedly, the eye size and double cone density decreased but the cone size remained unchanged. In response to the low DO levels, the gill surface increased. The cheek depth and premaxilla changed in a way that facilitates the manipulation of larger and more robust prey. In case of the latter, the changes found are of such proportion that they even cross subgenus boundaries. The found morphological changes reveal high similarity with changes found in plasticity experiments. We discuss the probability of phenotypic plasticity contributing to the morphological changes under natural conditions and the implications for the role of phenotypic plasticity in speciation.