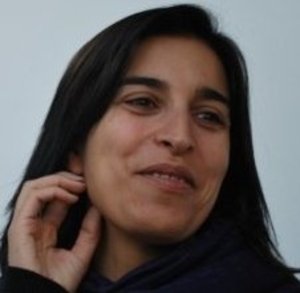 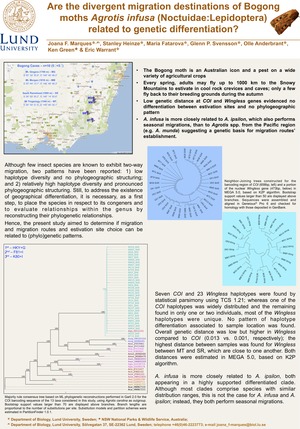 Long-distance seasonal migration mechanisms are still unclear, albeit their importance to species persistence and ecosystem functioning. Many populations have well defined migratory destinations and this might have important consequences on their genetic structuring: whereas different breeding grounds and divergent migratory pathways and destinations may result in a lower degree of genetic mixing hence promoting genetic differentiation, the use of common breeding and overwintering/summering grounds may result in a lack of genetic differentiation. Every spring, adult Australian Bogong moths (Agrotis infusa) migrate from western New South Wales and south-eastern Queensland to the Snowy Mountains (the highest peaks of the Great Dividing Range) to estivate in cool rock crevices and caves; they then return to their breeding grounds during the autumn to mate. During estivation, the moths are gregarious and remain in diapause serving as food for many insectivorous animals given their high body fat content (around 65%). Owing to their different summering sites, some may fly up to 1000 km in a single direction. Although some attempts to use genetic markers to identify specific natal sites of adult Bogong moths have been made, it is still unknown whether the different migratory pathways and destinations have a genetic basis. In summer 2012-2013, Bogong moths were collected live by hand at four estivation sites in New South Wales (Mount Gingera, South Ramshead, Mount Morgan, and Mount Tingaringy) and examined for sequence and haplotype diversity and genetic distance at mitochondrial and nuclear genes. The data will elucidate if differences in the migration routes and summering sites of these moths depend on—or have resulted in—genetic divergence, which will be essential for Bogong moth conservation. The Bogong moth is an iconic Australian species and the protection of their summering sites may be crucial to maintain species variability.