Molecular evolution in three Polycomb genes reveals a low level of variation in the nonrecombining dot-like chromosome of D. subobscura 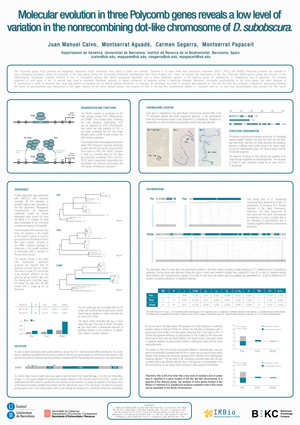 The Polycomb group (PcG) proteins are epigenetic repressors highly conserved from yeast to plants and animals. Clustered in at least three main functional complexes (PRC1, PRC2 and PhoRC) Polycomb proteins are involved in many biological processes, being the silencing of the Hox genes during the Drosophila embryonic development their most studied role. Here, we analyze the divergence of the Pho and Sfmbt genes coding the subunits of the Pleiohomeotic Repressive Complex (PhoRC) in the 12 Drosophila species with whole sequenced genomes and in three additional species of the obscura group (D. subobscura, D. madeirensis and D. guanche). The divergence study has been extended to Phol, a paralog of Pho. The multiple alignment of each gene in the 15 species was used in maximum likelihood analyses with PAML to try to detect evidences of selection acting in particular lineages. Finally, nucleotide polymorphism of the three genes has been analyzed in 15 lines of D. subobscura in order to estimate their level and pattern of variation and to detect putative deviations of neutrality. An extremely low level of variation was detected at Pho and the HKA test revealed a significant decoupling between the levels of polymorphism and divergence in this gene relative to the other studied genes. The location of Pho in the dot-like chromosome (Muller’s F element) with no, or very low, recombination may account for this result. Indeed, a low variation was previously reported in the F element of the melanogaster subgroup species. However, this is the first time that nucleotide polymorphism in genes of the dot-like chromosome is studied in D. subobscura, confirming a low level of variation in this nonrecombining chromosome in a species of the obscura group.