University of Bialystok, Institute of Biology
Department of Genetics and Evolution
Swierkowa 20B
Bialystok, 15-950
Poland

Glacial and postglacial history of Betula humilis in Poland and Belarus 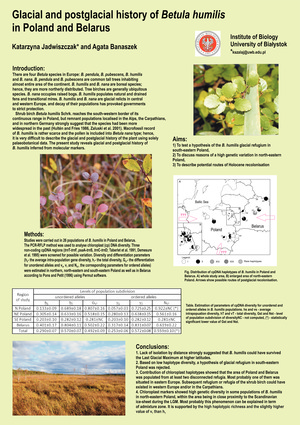 Trees and shrubs of the Betula genus inhabit diverse habitats in the Northern Hemisphere. In Europe, there are two tree birch species: Betula pendula and B. pubescens, and two shrub birches: B. nana and B. humilis. Both palaeontological and genetic investigations have shown that B. pendula and B. pubescens could have survived the Last Glacial Maximum (LGM) not only in southern European refugia but also at higher latitudes and after Holocene warming a rapid recolonisation occurred. The boreal shrub B. nana could have also existed in a periglacial area during the last glaciation. It is very difficult to reconstruct the glacial and postglacial history of B. humilis using solely palaeoecological data because the macrofossil record is rather scarce, and the pollen of this species is classified as B. nana type. The aim of the present study is to analyse variation of chloroplast DNA (cpDNA) haplotypes of B. humilis in order to describe the glacial and post-glacial history of the species in Poland and Belarus. Investigations were conducted in 25 populations of B. humilis. In total, 21 haplotypes were found but only two of them occurred with high frequencies. Clear predominance of two haplotypes in the studied area could be explained in terms of recolonisation from two distinct refugia. A weak genetic structure within the area populated by B. humilis has suggested that the species could have survived the LGM at higher latitudes. A glacial refugium of B. humilis was probably located in eastern Europe, another one could be situated in the Alps or the Carpathians. Low level of genetic diversity has not confirmed a hypothesis about B. humilis glacial isolate in south-eastern Poland. In turn, high haplotypic diversity has been revealed in some populations of B. humilis in north-eastern Poland and central Belarus. This pattern can likely be explained as a contact zone between different phylogeographic lineages.

The phylogeography of the common hamster, the species endangered in Europe

The common hamster (Cricetus cricetus L.) is a formerly steppe species, in Europe generally restricted to agricultural sites. The changes in agriculture practice, urbanization of formerly agricultural areas, direct persecution and, most probably, climate change caused the breakdown of populations in many European countries. For any conservation plans, it is essential to gain information about the phylogeographic lineages and their source, refugial populations. In Europe, three phylogeographic lineages were described so far: North in Western Europe and Germany, Pannonia in the Carpathian Basin and E1 lineage in Eastern Poland and Western Ukraine. Paleontological data suggest that the common hamster survived the maximal glaciations in the Ukrainian and European Russian belt of steppes. The aim of this work was to describe the genetic differentiation of the Ukrainian populations, which could serve as a source of westward expansion of hamsters into Central and Western Europe. The phylogeographic analysis was performed on the basis of three sequences of mitochondrial DNA (the control region, 16S rRNA and cytochrome b) and six conserved intron loci located on the Y chromosome (YCATS). The phylogeographic relationships of the analyzed populations will be described on the basis of the gene trees and networks of haplotypes. The levels of diversity will be compared with other described populations.