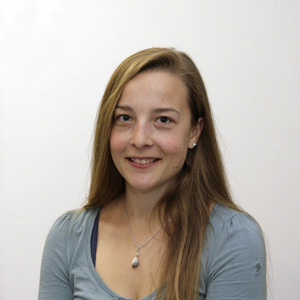 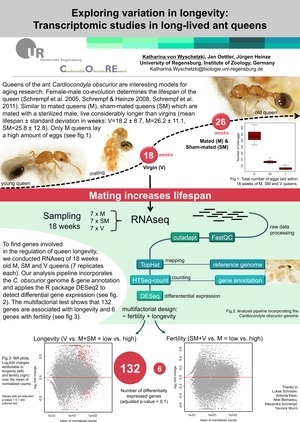 Senescence occurs in all multicellular and unicellular organisms. It is generally assumed that lifespan is genetically determined. Several candidate genes are suspected to be responsible for a gradual deterioration of physical function. These findings mainly arise from experiments with rather short-lived organisms (flies, worms, mice). However, the enormous intraspecific variation in longevity is often disregarded. Social insects with their different castes (queens, workers, males) have plastic life history traits which also include different aging rates. Ant queens are famous due to their exceptional long life spans compared to workers and males, making them a good model for the study of aging. The myrmecine tramp ant Cardiocondyla obscurior lacks the "reproductive senescence" which is normally present in other organisms (Heinze & Schrempf 2012). In addition, female-male co-evolution determines the lifespan of the queen (Schrempf et al. 2005, Schrempf & Heinze 2008, Schrempf et al. 2011). However, even queens mated with a sterilized male live considerably longer and start to lay eggs earlier than virgin females. In order to gain insights into lifespan-mediating mechanisms of mating, we conducted RNAseq of gene expression of old queens that were subjected to different mating. By comparing old queens mated to a fertile or a sterile male with virgin queens, we aim to find genes involved in the regulation of queen longevity.