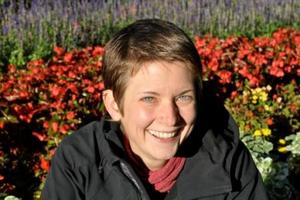 A trait’s response to natural selection will reflect the nature of the inheritance mechanisms that mediate the transmission of variation across generations. The relative importance of genetic and nongenetic mechanisms of inheritance is predicted to be related to the degree of trait plasticity, with nongenetic inheritance playing a greater role in the cross-generational transmission of more plastic traits. However, this prediction has never been tested. We investigated the influence of genetic effects and nongenetic parental effects in two morphological traits differing in degree of plasticity by manipulating larval diet quality within a cross-generational split-brood experiment using the seed beetle Callososbuchus maculatus. In line with predictions, we found that the more plastic trait (elytron length) is strongly influenced by both maternal and paternal effects whereas genetic variance is undetectable. In contrast, the less plastic trait (first abdominal sternite length) is not influenced by parental effects but exhibits abundant genetic variance. Our findings support the hypothesis that environment-dependent parental effects may play a particularly important role in highly plastic traits and thereby affect the evolutionary response of such traits.