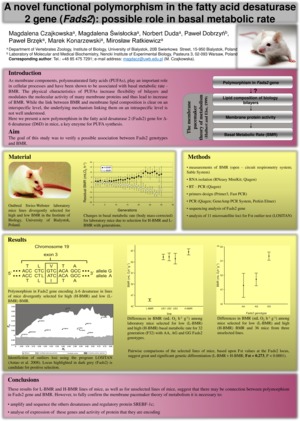 As membrane components, polyunsaturated fatty acids (PUFAs) play an important role in cellular processes and have been shown to be associated with basal metabolic rate (BMR). While the link between BMR and membrane lipid composition is clear on an interspecific level, the underlying mechanism linking them on an intraspecific level is not well understood. Probably one reason for this is that variation of a physiological trait like BMR is much narrower within a species than between organisms from two different species, and in turn the mechanisms explaining any observed variation could be subtler. In this circumstance, a much stronger methodology for studying BMR should be found in artificial selection experiments which manipulate the frequencies of genes directly related to the trait under study. Here we describe a new polymorphism in the fatty acid desaturase (Fads2) gene for Δ-6 desaturase (D6D), a key enzyme for PUFA synthesis, in 120 males from two genetic lines of outbred Swiss Webster laboratory mice (Mus musculus) selectively bred for 32 generations (F32) towards low and high BMR. For controlling the force of genetic drift, we also used 78 mice of generation 22 (F22). For the same reason, we analyzed 36 mice from three unselected lines of mice maintained in a separate, concurrent selection experiment in generation 16 (F16). The aim of this study was to verify a possible association between Fads2 genotypes and BMR. We found significant correlation between Fads2 variants and BMR within selected, as well as unselected lines of mice. We also used a FST outlier test to asses the effect of selection on the variation between L-BMR and H-BMR lines of mice at the Fads2 gene, using the Fads2 gene, together with data from the 11 microsatellite loci. Taken together, these results suggest that Fads2 is expected to become a major focus of membrane, metabolic rate and human metabolic syndrome research.

Moose (Alces alces) are highly mobile mammals that occur across arboreal regions of North America, Europe and Asia. Hundertmark et al. (2002) identified three distinct mtDNA lineages of moose in these regions. The distribution of these lineages indicated a geographic structure associated with a glacial history. To examine the genetic diversity and population structure of moose in northeastern Poland we analyzed mtDNA sequences of 1747 bp long (control region combined with cytochrome b) of 500 individuals from 13 populations. Our study revealed presence of 12 haplotype belonging to the European lineage, from which only five haplotypes were early detected by Hundertmark et. al. (2002) exclusively among moose from Scandinavian Peninsula. The haplotype (h) and nucleotide (π) diversity values for analyzed moose samples were respectively 0,76 and 1,2%. Altogether, 27 sites were variable and all substitutions appeared to be transitions. In our study the haplotype H1 was mainly present in the Biebrza Valley and it was divergented from the remaining European haplotypes. Phylogenetic relationships were computed using a Neighbor-Joining (NJ) and a Maximum Likelihood (ML) trees. In both analysis the clade contained the unique haplotype H1 from the Biebrza Valley was the most distinct within the European lineage. Net sequence divergence between these clade and the others European haplotype amount 1,4%, which means moose from the Biebrza Valley separated 23000 years ago, eg during the Last Glacial Maximum (LGM). We also found that genetic differentiation between several moose populations in northeastern Poland was great, for example the ФST value between two neighbouring populations: from the Biebrza Valley and the Augustowska Forest was 0.55. In addition, we analyzed others classes of molecular markers: 11 microsatellite loci and markers located on Y chromosome (SRY and YCATs) which also confirmed relic character of moose from the Biebrza Valley.

The Biebrza marshes are one of the most important refuges for moose in Poland, where since 2001 temporary moose-hunting moratorium is imposed. The Biebrza population numbers over 600 individuals and is genetically distinct from other populations in Poland. In 2011, we initiated a project on space use and foraging ecology of moose with the use of modern methods: GPS-tracking and DNA-based diet analysis. We immobilised 21 moose (11 females and 10 males) in January-March 2012, and fitted them with GPS-GSM collars (Ecotone, Poland). Collars collect 24 locations a day. Our preliminary results showed that in winter, moose ranges (MCP 100%) covered an average area of 12.5 km2 (range: 3.2 - 30.2 km2) and did not differ significantly between males and females. Mean daily movement distance was 1,68 km (range: 0.78 – 2.12 km). Collared animals utilised mainly pine forests. The majority of moose (67%) migrated a short distance (7.0 km on average; range; 3.3 to 18.8 km) in late March and April to the marshland. Spring ranges of collared individuals covered 16.8 km2, on average, significantly larger for males (25.6 km2) than for females (8.0 km2).