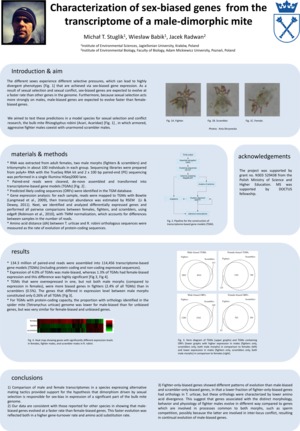 The different sexes experience different selective pressures, which can lead to highly divergent phenotypes that are achieved via sex-biased gene expression. As a result of sexual selection and sexual conflict, sex-biased genes are expected to evolve at a faster rate than other genes in the genome. Furthermore, because sexual selection acts more strongly on males, male-biased genes are expected to evolve faster than female-biased genes. We aimed to test these predictions in a model species for sexual selection and conflict research, the bulb mite Rhizoglyphus robini (Acari, Acaridae), in which armored, aggressive fighter males coexist with unarmored scrambler males. We sequenced and de-novo assembled transcriptomes of adult males and females. Expression of 4.0% of 114,456 transcriptome-based gene models (TGMs) was male-biased, whereas 1.3% of TGMs had female-biased expression and this difference was highly significant. For TGMs with protein-coding capacity, the proportion with orthologs identified in the spider mite (Tetranychus urticae) genome was lower for male-biased than for unbiased genes, but was very similar for female-biased and unbiased genes. Mean amino acid distances between male-biased R. robini genes and their T. urticae orthologs were significantly greater than those between unbiased genes and their orthologs; female-biased gene orthologs had distances similar to those of the unbiased orthologs. The higher number and faster evolution of male-biased genes are consistent with the hypothesis that sexual dimorphism is driven mostly by male-biased sexual selection. This hypothesis is further supported by the result that the fighter morph, which is behaviorally and morphologically adapted to intense intrasexual competition, was characterized by a considerably larger number of overexpressed (compared to female expression levels) genes than the less sexually dimorphic scrambler morph.