Speciation history of the Atlantic eels 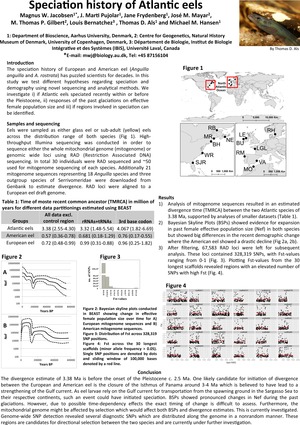 Allopatric speciation has generally been considered the most prominent process for the evolution of new species. Although evidence for sympatric speciation has increased recently it is still controversial to what degree it occurs in nature. Hence, it is generally accepted that allopatric speciation should be the null hypothesis against which sympatric speciation is tested. Marine environments often have no obvious geographic barriers, which makes sympatric speciation a likely scenario. However, only few marine organisms have the characteristics that make them good candidates for testing mode of speciation. The European and American eel (Anguilla anguilla and A. rostrata) are panmictic species that spawn in the Sargasso Sea. Their spawning area and time overlap considerably. Hybrids are rarely observed, indicating reproductive barriers. In this study we conduct whole mitochondrial genome and RAD sequencing to investigate the speciation history of the two Atlantic species of eel. Using coalescence based analyses we estimate divergence time to test the hypothesis that speciation occurred long time ago in sympatry. As a result of continental drift the distance between the spawning grounds increased, causing selection on e.g. duration of the larval phase. The alternative hypothesis concerns speciation in allopatry during the Pleistocene. Glaciations significantly decreased the amount of available habitats in coastal regions and freshwater bodies. Hence, population size is likely to have undergone a severe decrease. The smaller population sizes of European and American populations would result in reduced overlap of spawning area leading to reproductive isolation. The impact of the last glaciation on effective population size is assessed by conducting Bayesian skyline plots based on the mtDNA. Finally, patterns of genome-wide selection between the two species are analyzed using RAD sequence data in order to detect genes and genomic regions involved in speciation.

Hybridization is an important issue in evolutionary biology and conservation. We investigate the dynamics of introgressive hybridization in North Atlantic eels, the European eel (Anguilla anguilla) and its sister species the American eel (Anguilla rostrata). The two North Atlantic eels occupy a broad range of habitats from Morocco to Iceland in the eastern Atlantic and from the Caribbean to Greenland in the western Atlantic, respectively. Despite such a wide non-overlapping geographic distribution, both species spawn in partial sympatry in the remote Sargasso Sea, in a migration of over 5,000 km for the European eel and 2,000 km for the American eel, which still represent to this day one of the enigmas of the animal kingdom. Spawning grounds of both species overlap in space and time, setting the stage for interbreeding. Previous studies have pointed to the existence of hybrids limited to one particular location, Iceland, although markers used did not allow clarification of their hybrid status. In our study, diagnostic species-specific single nucleotide polymorphisms (SNPs) are developed using a RAD-sequencing approach, which is a reduced representation genome sequencing method. After generating and aligning over 8000 sequence read per individual, a total of 3,348 diagnostic SNP (FST> 0.95) were identified. 96 of of those loci were selected to design a low-density array, at which we genotyped 159 eels from Iceland and 29 eels from Faroe Islands. The study was supplemented with the analysis of 94 larvae (49 European and 45 American eel) collected in the Sargasso Sea. Our study reveals high levels of hybridization in Iceland mostly consisting of F1 hybrids but backcrosses (A. anguilla x hybrid) are also observed. In comparison, no hybrids are observed in the closely-located Faroe Islands.