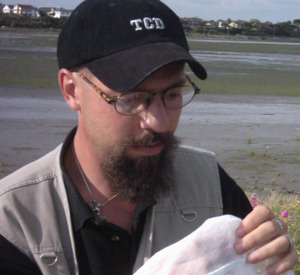 Many bacteria that establish mutualistic associations with insects are transmitted from mother to offspring under a vertical regime. This transmission mode imposes strong bottlenecks on the effective population sizes of bacteria, resulting in a high genetic drift effect and, consequently, increased genetic variability among populations and decreased polymorphism within populations. Inactivation and degradation of genes that are unnecessary in an intracellular environment is a common symptom of symbiotic lifestyle. Two main questions remain unanswered with regards to the evolution of these bacteria: (a) how do essential genes for symbiosis counteract the effect of mutations fixed under inefficient selection in the genome? And (b) what mechanisms increase the mutational robustness of symbiotic genes? Here we have conducted an evolution experiment using the bacterium Escherichia coli to simulate the mutation dynamics under inefficient natural selection occurring in symbiotic bacteria. Evolution of E. coli for more than 5000 generations reveals the network of interactions between mutations, the set of useful, although not essential, genes for symbiosis and the role of GroEL in mutational robustness. Our results unveil a more complex scenario for the evolution of symbiosis than anticipated by previous studies.

Ant-plants are interesting model systems of protective mutualisms in which the associated ants are assimilated as agents of constitutive indirect defense. The plants provide ants with nesting space and food in exchange for indirect benefits such as protection. The outcomes of the relationship might, however, vary according to the behavior of the interacting ant partners, thus differently influencing plant fitness. Here, we explore this framework by studying a two-to-one ant-plant mutualism between two closely-related ant species, Allomerus decemarticulatus and A. octoarticulatus, competing for the same host-plant species, Hirtella physophora. In these systems, both ant species specifically cultivate a third partner, an Ascomycota fungus. The fungus plays a structural role that the ants use it in constructing gallery-shaped traps to ambush prey and by penetrating into the plant tissue, the hyphae also enhance plant nutrition in both systems. We also examine how the behavioral ecology of these two ant species affects host-plant fitness. First, we show that differences in the efficacy of the predation strategy (ambushing and patrolling leaves) induce a variation in the intensity of the biotic defense, affecting plant growth and fruit production. Moreover, these two ant species impose reproductive costs on their host-plant by partially destroying floral buds. This castration behavior favors the production of more leaves for the host-plant (nesting space for the ants) thanks to the reallocation of plant energy from reproduction to growth. However, plants totally castrated experimentally produced notably smaller domatia and extrafloral nectaries. Such a decrease in the investment in myrmecophytic traits demonstrates the existence of inducible sanctions against too virulent castrating ants. Altogether, these results show how multiple, co-occurring symbiont species (and their traits) influence host-plant performance by modulating their context-dependent outcomes.