Because hosts and parasites exert strong selection pressure on each other, it is particularly relevant to study their interaction in an evolutionary context. Experimental Evolution permits the establishment of causality between evolutionary processes and adaptation patterns. Here we use experimental evolution of Drosophila melanogaster exposed to Drosophila C virus (DCV) to address the phenotypic and genotypic changes of hosts evolving in presence of parasites. Upon exposure to the virus, Drosophila survival increased from 33% to almost 90% after 35 generations of selection. This response carried no detectable costs in fitness in the absence of infection, and was not lost after 10 generations in the absence of selection. Cross-resistance was found for other viruses, such as CrPV and FHV, but not to bacterial pathogens. Whole genome sequencing of pooled samples of virus-selected populations and their matching controls at generation 20 uncovered two regions of significant differentiation between these groups of populations. The first corresponded to a region of 4 megabases(Mb) in the 3L chromosomal arm. This region’s peak of differentiation corresponded to a polymorphism in pastrel (pst), a gene recently associated with increased DCV resistance. The second was a pair of significantly differentiated SNPs in the X chromosome, in genes not previously associated with virus resistance. Results with a panel of deficiencies in the 3L chromosome confirmed that deficiencies which encompass pst are the ones with more influence on survival after DCV infection, in a region of approximately 2 Mb. There is ongoing work to confirm the involvement of other candidate genes in this region and of the genes in the X chromosome in resistance to DCV infection. Overall we show that selection for increased virus resistance I) is stable and bears little costs, II) is advantageous in the defense against other viral pathogens, and III) has a simple genetic basis.

Host adaptation is contingent upon the infection route taken by pathogens 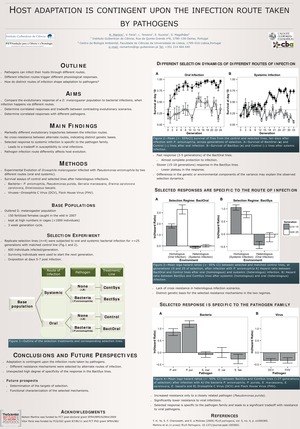 Horizontally-transmitted pathogens can infect their hosts through different routes. Yet, the physiological and evolutionary consequences to the host of distinct modes of pathogen access are virtually unknown. To tackle this question, we used Experimental Evolution of Drosophila melanogaster infected with Pseudomonas entomophila by two different routes (oral and systemic). We found that adaptation to both routes relied on resistance. Moreover, adaptation to infection through one route did not protect from infection through the alternate route, indicating distinct genetic bases. Also, the two selection regimes led to markedly different evolutionary trajectories. Finally, relatively to the control population, evolved flies were not more resistant to bacteria other than Pseudomonas and showed higher susceptibility to viral infections. These specificities and trade-offs may contribute to the maintenance of genetic variation for resistance in natural populations. Moreover, our data shows that pathogen infection route affects host evolution. Therefore, the study of host-pathogen interactions should account not only on host and pathogen evolution, but also on the ecology of the infection, when interpreting patterns of variation in natural populations.