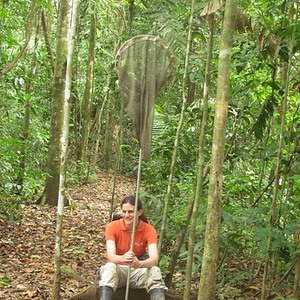 The butterflies Heliconius erato and Heliconius melpomene are well known for their amazing mimetic similarities in colour pattern. These colour patterns vary across their geographic distribution with parallel hybrid zones in both species found between adjacent colour pattern races. Here we use RAD sequencing to investigate patterns of genome-wide divergence across two such hybrid zones of both species, in Peru and Ecuador. These data are successfully used to map loci controlling colour pattern differences between races and confirm previous findings that largely the same loci are responsible for colour pattern differences in the two mimetic species. In addition, these loci are among a handful of divergence outliers identified in the genomes, supporting the assertion that strong selection acting on colour pattern is one of the primary forces maintaining these hybrid zones. In spite of the striking parallels at the genomic level between species we do also find some previously unidentified differences. We also compare different techniques for analysis of this type of data, which we envisage being ever more widely used for the analysis of adaptive divergence in wild populations.

Heliconius display bright wing patterns that warn predators of distastefulness and also act as mating cues. The diversity of patterns displayed within and between the hundreds of forms is remarkable, as is the convergence between species onto near-perfect mimetic patterns. Recent field studies have identified a group of populations along the eastern slopes of the Andes that are allied to H. timareta and share wing phenotypes with sympatric H. melpomene. Genomic studies have shown that the populations with similar phenotypes also share allelic variation at wing patterning loci, with adaptive introgression across the species boundary providing the most likely explanation for this pattern.

We sequenced a 600 Kb genomic region that regulates diverse red wing pattern phenotypes, using 80 Heliconius samples. Genomic intervals associated with at least three independent red colour pattern phenotypes were resolved using sequence comparisons that grouped similar wing phenotypes, irrespective of species. By comparing the level of nucleotide variation within each colour pattern interval, we estimate the time in generations when introgression events occurred between H. melpomene and H. timareta. Gene exchange after speciation has resulted in the adaptive spread of colour pattern alleles. Here we have identified narrow genomic regions that must act through cis-regulatory control of the transcription factor optix, in order to control complex phenotypes.