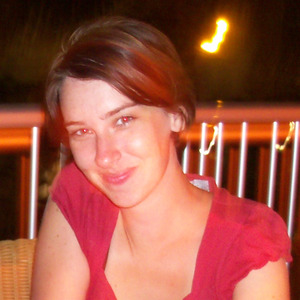 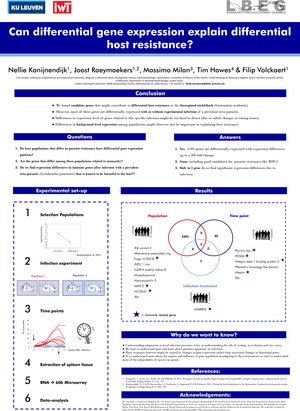 Our ability to find signatures of selection in the genome is rapidly increasing. As a consequence we now know that strong selection leading to local adaptation can affect many regions in the genome. However, not all local adaptations result in structural gene changes. Changes in regulation of existing genes might be at least as important. To what extend this happens and whether selection only affects genes directly related to the focal trait, or also other gene classes is for many cases unknown. Host-parasite systems are very suitable for testing the importance of gene expression alterations in local adaptation. Selection is often strong due to the fact that parasites can have a big impact of fitness of the individual, making it probable we can pick up alterations in expression. Start and finish of changes in gene expression are much easier to predict than for many other (somatic) traits and temporal an spatial fluctuations in parasite abundance are common in nature, which may favor changes in gene expression rather than genetic changes as they are much easier to reverse. We used the F2 generation of two populations of stickleback fish that differ in host resistance, in order to identify which genes are involved in resistance and to understand whether heritable differences in resistance across populations are linked to differential gene expression. We infected naive fish with Gyrodactylus gasterostei, a parasitic flatworm and tracked the infection by counting parasites on the skin over time. Targeting the beginning and peak of the infection, we used microarrays to identify differential gene expression across the genome. We will present whether differences in host resistance result in differential expression patterns among populations and whether infection only affects immune related genes or a wider set of genes, thereby contributing to a better understanding of the role of gene expression alterations in host adaptation to parasites.