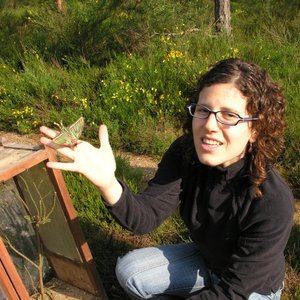 Understanding the spatial genetic structure of populations can provide insight into ecological and/or evolutionary processes, thus enabling conservation decisions about a given species. We characterised the genetic structure of the Spanish Moon Moth Graellsia isabellae as revealed by multilocus (9 microsatellites) genotyping of 290 males sampled at the the Pyrenean National Park of Ordesa and surrounding buffer zone (a total of 13 sites separated by up to 28 km). Despite the overall low genetic differentiation and similar levels of diversity among sites, we found (i) significant west-east population structure as indicated by Bayesian clustering methods, (ii) a cryptic barrier to gene flow around one particular sampling site (Ordesa), and (iii) directional gene flow towards a second locality (Bujaruelo). Pairwise FST values showed that mountains prevent direct gene flow between the western and easternmost sites. However, low migrations rates were detected between intermediate sites (southern side of mountains), resulting in a clinal genetic variation throughout the Park, confirmed by isolation by distance analysis and individual membership coefficients to the clusters. We have analysed the patchy distribution and logging/reforestation history of the larval host plant (Pinus sylvestris) as explanatory factor for the cryptic barrier. Lastly, the combination of spatial configuration of woodland patches plus predominant wind direction is put forward to account for the directional migration toward Bujaruelo, a locality in the buffer zone near the National Park. Our work highlights the importance that buffer areas have to preserve high genetic diversity of forest insects within a national park.

Phylogeography and conservation of a protected moth

Phytophagous insects, one of the most diverse animal groups, and their host plants provide excellent model systems to assess the relative contribution of extrinsic environmental factors and intrinsic lineage-specific traits to diversification. We selected the Spanish Moon Moth Graellsia isabellae, an insect that feeds on three pine species, as a model organism to study how modifications in habitat availability influenced the survival of organisms. DNA variation in one mitochondrial and nine nuclear microsatellite markers revealed six clusters across the 28 studied populations in Spain and France. This strong phylogeographical pattern was most likely driven by oscillations in the host-plant distribution range, as four of the six clusters coincide with glacial refugia for Pinus sylvestris, the main host. Both the Central Iberian and French Alpine clusters show the lowest genetic diversity and they are probably the result of postglacial range expansions. We propose the Late Quaternary retraction of P. sylvestris in Southern Spain as the ecological driver for a host-shift to other congeneric species: P. nigra and P. halepensis. Lastly, we define six evolutionary significant units (four of them congruent with the subspecific taxonomy) intimately related to suitable habitat, the main factor shaping the identity of this phytophagous lepidopteran.

Accurate knowledge of both effective population size (Ne) and census population size (N) is crucial for the efficient management of endangered species. Here we estimate both parameters for the protected moth Graellsia isabellae. We used both mark-release-recapture methods and microsatellites variation to obtain estimates of N and Ne for two Iberian populations: Puebla (Eastern Spain) and Ordesa (Pyrenees). A different Ne/N ratio for both populations was the result of similar census population size estimates, and contrasting effective population size values obtained by molecular single-point and temporal approaches. Demographic analyses and comparison between long and short-term approaches revealed that the main factor causing disparity between Ne estimates was a bottleneck, most likely caused by anthropogenic deforestation in Ordesa, although the species currently dwells in an optimal habitat. By contrast, the larger Ne showed by the population at Puebla confirmed its demographic stability. We discus the vulnerability of these two distinct populations of this emblematic insect, as the Ne/N estimates provided useful insights into the loss of genetic diversity and evolutionary potential. Therefore, we propose the re-categorisation of Graellsia isabellae in some sub-national and the national Spanish Red Lists.