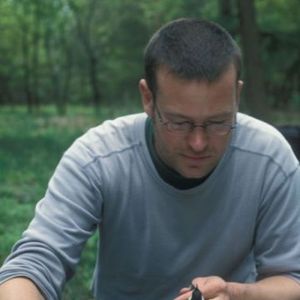 When does environmental change lead to selection on phenotypic plasticity? 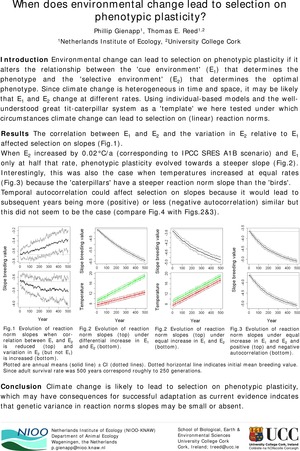 Continuous environmental change can lead to selection on the reaction norm slope if it alters the relationship between the optimal phenotype and environmental cues that determine the actual phenotype. For example, breeding time in small insectivorous birds, as e.g. great tits or flycatchers, is determined by temperatures in early spring while their reproductive success depends on insect phenology determined by temperatures in late spring. Differential changes of these two temperatures could alter the relationship between the cues used by the birds and the insect phenology and lead to selection on the slope of the birds’ breeding time reaction norm. There are however a number of factors that could additionally affect the strength of this selection: It has been argued that in long-lived organisms plasticity would be more adaptive than in short-lived organisms because long-lived organisms experience a larger range of environments. Another relevant factor is temporal autocorrelation of environments: positive or negative autocorrelation will lead to environments experienced by an individual being more or less similar, which would affect the strength of selection on plasticity. The correlation between cues and optimal phenotypes also affects the strength of selection on plasticity as a low ‘cue reliability’ would select for less plasticity. Using simulation models we explored these effects in a scenario of a directionally changing environment focusing on phenological traits under climate change. Phenological traits are heritable but most genetic variation is present in the intercept of the reaction norm rather than the slope. Since the evolutionary potential of plasticity hence seems to be limited, strong selection on it would have negative demographic consequences. Consequently, it is important to know whether and how strongly environmental change would lead to selection on plasticity to better assess potential extinction risk caused by environmental change.

For reliably predicting micro-evolution it is crucial to properly estimate the trait’s heritability. In natural populations heritabilities are often estimated using ‘animal model’ analyses that are based on pedigrees. As these data from natural populations are observational it leaves the possibility that the resemblance between related individuals is not due to shared genes but, e.g., to ontogenetic effects. Such effects could possibly severely bias heritability estimates of breeding time in birds: when the environment for the offspring provided by early breeding pairs differs from that by late breeding pairs and the breeding time of these offspring when they reproduce themselves is affected by this environment, this may lead to inflated heritability estimates. Using simulation studies based on data from two long-term study population of great tits (Parus major) we tested whether and how much such an early environmental effect can inflate heritability estimates from ‘animal models’. We showed that early environmental effects can inflate heritability estimates depending on pedigree structure. We also used data from a wild population of great tits to directly test potential early environmental effects by comparing breeding time of females born early in the season in first broods and with that of sisters born much later in the season, namely in second broods. These birds are raised under very different environmental conditions but have the same genetic background. The egg-laying dates of first and second brood offspring do not differ when they reproduce themselves, clearly showing that ontogenetic effects are very small and hence family resemblance in timing is due to genes. Our results hence show that while ontogenetic effects do not affect an individual’s breeding time as an adult, similar early environmental effects could potentially inflate quantitative genetic parameters from ‘animal model’ analyses depending on pedigree structure.

Quantifying the demographic cost of selection in a changing environment

The lag load, or reduction in mean fitness caused by incomplete adaptive tracking of a moving phenotypic optimum, is a key quantity in models of evolution in changing environments. Despite its central theoretical importance, empirical studies quantifying the lag load and the factors affecting it are lacking. Here we explore these issues in a Dutch population of great tits Parus major, where warming springs have generated a mismatch between annual breeding time and the timing of an important food resource, providing an ideal opportunity to examine how the resulting directional selection for earlier breeding time impacts population mean fitness and related demographic parameters. First, we show that interannual variation in mismatch over almost four decades has surprisingly not affected population growth, despite it having led to intensified directional selection. We demonstrate an important mechanism contributing to this uncoupling, whereby fitness losses associated with mismatch are counteracted by fitness gains due to relaxed competition. Next, we parameterised a quantitative genetic model to predict the theoretical ‘critical rate of environmental change’, beyond which increased maladaptation leads to population extinction. Results imply that even ‘mild’ rates of climate change would be close to the critical rate. However, individual-based simulations that account for both evolutionary processes and density dependence revealed that the expected time to extinction, although highly uncertain, is on the order or centuries, rather than decades. These findings imply that microevolution would only rescue the population from mild rates of sustained climate change. On the other hand, they also illustrate that considerable maladaptation can be demographically tolerated in the short term through density dependence, without immediate population declines, effectively ‘buying time’ for microevolution to restore adaptation until the environment (climate) stabilises.