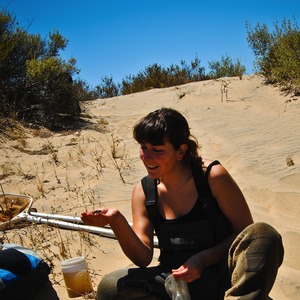 The efficiency of induced antipredator responses critically depends upon accurate cue recognition and hence requires some joint predator-prey evolutionary history because otherwise preys may fail to recognize or respond efficiently against alien predators. Thus, amphibian larvae often fail to trigger antipredator responses against invasive predators. Few studies analyzed the ecological consequences of predator-tadpole interactions on the rest of the aquatic communities of temporary ponds, but amphibians’ impact on the community structure and dynamics of aquatic systems may be conditioned by their interactions with competitors and predators. Thus, predators can potentially have cascading effects on pond communities via alterations in amphibian larval density and/or their phenotype. We used a mesocosm array at Doñana National Park to test for density dependent and density-independent effects of native and invasive predators on survival and growth rate of amphibian larvae, also quantifying its consequences on the food web. Invasive predators caused greater mortalities of amphibian larvae than native predators, hence having a stronger potential for direct density-dependent effects on amphibian guilds and their interactions in the trophic web. Moreover, crayfish increased turbidity and nutrient content in the water and had a direct negative impact on plants that was carried over into the following hydrological cycle. Thus, our results highlight how this invasive species poses a greater predatory threat to amphibians than other native predators, and can also be highly disruptive of the entire pond structure.

Is predator-induced phenotypic plasticity regulated by DNA-methylation in tadpoles?

Phenotypic plasticity is the ability of a genotype to modify its phenotype in response to reliable environmental cues. The knowledge of the mechanisms involved in plasticity is the key to understand its ecological, developmental and evolutionary consequences. In the last decade, epigenetic changes have been pointed out as explanations for several phenotypically plastic changes. In particular, DNA methylation has been linked to phenotypic plasticity and evidence is quickly accumulating across different taxa. Here we tested if the predator-induced phenotype observed in many amphibian larvae was the consequence of changes in gene expression derived from changes in the pattern of DNA methylation. Tadpoles produce anti-predator phenotypes that include a conspicuous increase in relative tail depth and a reduction of activity rate. To test if these plastic responses are epigenetically regulated, we exposed Pelobates cultripes tadpoles to the presence or absence of chemical cues from predators, while previously treating or not tadpoles with 5-azacytidine, a DNA methylation inhibitor, in a 2x2 factorial experiment. Our experimental treatments were: control (clean water), predator cues (dragonfly nymphs, Anax imperator), 5-azacytidine, and 5-azacytidine plus predator cues. Tadpoles exposed to predator cues showed the expected antipredator morphology, whereas tadpoles exposed to predator cues but earlier treated with 5-azacytidine showed an intermediate phenotype between the control and predator exposed tadpoles. They also showed a substantial decrease in activity rate as compared to control tadpoles and even to predator-exposed tadpoles. We are currently undertaking a molecular analysis with methylation-sensitive amplified length polymorphism (MSAPs), to quantify the changes in epigenetic marks. In view of these results, it seems like epigenetic regulation of predator-induced phenotypic changes in Pelobates tadpoles may be at least partially driven by DNA-methylation.