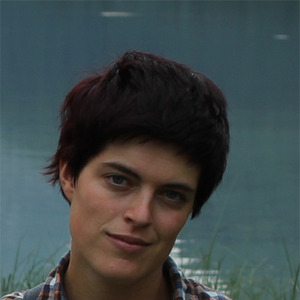 Researcher and PhD Student at the Universities of Innsbruck and Vienna
University of Innsbruck
Institute of Botany
Sternwartestraße 15
Innsbruck, 6020
Austria

Can epigenetic differentiation cause the formation of ecotypes? Insights from stable altitudinal variants in the mountain plant Heliosperma pusillum (Caryophyllaceae) 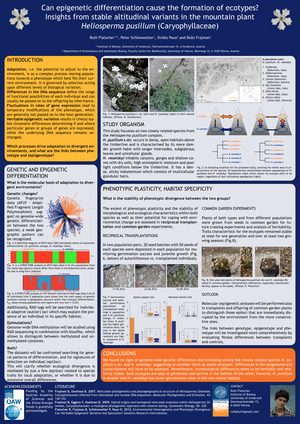 Adaptation is a process which continuously moves populations towards better fit phenotypes. In its widest sense, it involves short-term effects such as mechanisms of short-term transcription regulation, and long term-effects which result from natural selection acting on different kinds of heritable variation (i.e. segregating [epi-]allelic variants). Variations in biotic and abiotic conditions thus often lead to the formation of “ecotypes”, i.e. distinct populations adapted to their specific habitat. If gene flow is limited, initial inter-fertility with other conspecific ecotypes may change into increasing divergence and incompatibility over time, and eventually result in speciation. An interesting example for multiple, independent origins of ecotypes is found in the mountain plant Heliosperma pusillum s.l., which comprises a widespread alpine ecotype inhabiting mountain creek banks and moist calcareous screes (H. pusillum s. str.), as well as a lowland ecotype with disjunct and locally limited distribution growing in gorges and under overhanging cliffs (H. veselskyi). AFLP fingerprints as well as non-coding chloroplast and nuclear sequences consistently indicate that there is no genome-wide genetic differentiation between these altitudinal variants which would mirror the conspicuous morphological and ecological differences. Nevertheless, morphology of the two types remains stable for at least one generation in offspring grown from seeds of high- and low altitude accessions in a common garden. We use methylation sensitive amplified polymorphism (MSAP) to test for genome-wide differences in DNA methylation in six pairs of high- and low altitude ecotypes from the Eastern Alps. We discuss the correlation of methylation patterns with evident phenotypic differences and the possible role of epigenetics in the initial phase of divergent evolution of ecotypes. 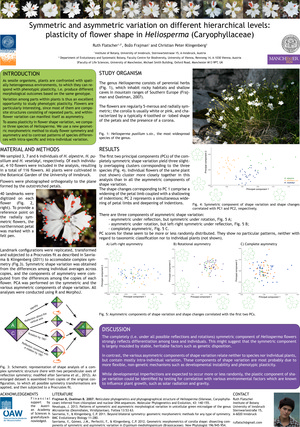 Plants usually have a modular body plan, which consists of a number of building blocks (or modules). As sessile organisms, they are often confronted with spatially heterogeneous environmental conditions. Plastic responses may thus contribute to variation on several hierarchically organized levels: among parts within a module, among modules within an individual, among individuals within populations or species, and among populations or species. Flowers are particularly interesting, since most of them are composite modules consisting of several, repeated subunits, and within-flower variation can manifest itself as asymmetry. To assess the plastic component in flower shape variation, we examine whether directional environmental influences such as sun radiation and gravity produce a directional plastic response in morphometric traits. We compare several species of Heliosperma with 5-merous, radially symmetric flowers. Plants were grown in common garden, representative photographs of several flowers per individual were taken together with orientation and inclination data of each flower, and flat preparations of petals were made. Geometric morphometrics was used to characterize shape variation and asymmetry. Correlations of asymmetry with orientation and inclination of single flowers were evaluated and related to possible ecological functions and selective advantages. Furthermore, we quantified the amounts of variation associated with different levels – among and within species, among flowers within individuals, and between petals of one single flower. We discuss the role of plasticity for floral asymmetry, subindividual and higher-level variation.