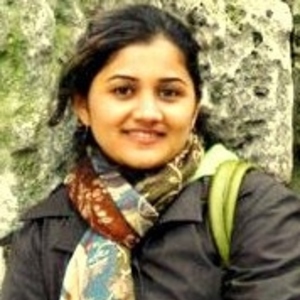 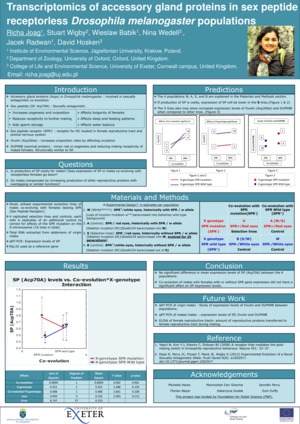 Accessory gland proteins (Acps) are male reproductive tract proteins transferred to females during copulation, which alter their reproductive physiology and behaviour. One of the Acps in Drosophila melanogaster, sex peptide (SP) not only alters fecundity and sexual receptivity of the females, but also affects their immune system, feeding, and longevity. It is thus sexually antagonistic and costly to the females. We want to examine whether production of SP is costly to the males. SP acts through binding to specific sex peptide receptors (SPR) in the female reproductive tract and the central nervous system. We are studying gene expression levels of SP in males from selection populations of D. melanogaster in which females do not express the sex peptide receptor. The benefit of producing SP being thus removed, we hypothesize that, if production of SP is costly to males, this should lead to a decreased gene expression of SP in such populations. We also intend to test whether the males compensate by increasing production of other Acps/seminal proteins such as Ovulin and DUP99B (Ductus ejaculatorius peptide 99B) since these proteins have some overlapping functions with SP. RT-qPCR will be used to quantify the expression of SP, Ovulin and DUP99B in the males. ELISA of female reproductive tract will be used to quantify the Acps transferred to the females during mating. This will indicate whether or not there is a correlation between gene expression levels and the amount of protein retained in the females an hour after mating.