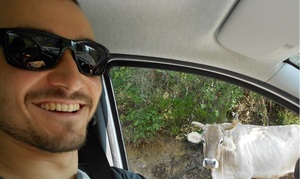 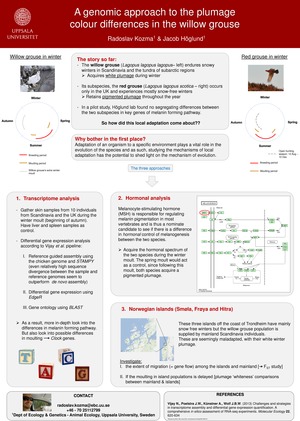 My work aims to combine the field of genetics with the application of population structure modeling as well as a more individual based genome modeling. The species of my study is the willow grouse (Lagopus lagopus), which has an interesting phenotypic diversity across its range. In Scandinavia, individuals adopt a white plumage during winter, while individuals in the northern UK forgo moulting and remain brown. Interestingly, snow free islands off the coast of Norway harbor the Scandinavian populations in fluctuating densities, which are seemingly maladapted seeing as their white plumage stands out. With the help of population modeling, one of the aims is to model the dynamics of movement to identify conditions required for local adaptation (i.e. what would it take for the island populations to stop their winter moulting). Furthermore, the genome of the willow grouse will be sequenced with the aim of finding potential genes responsible for this variation in moulting behaviour. In turn, models of the genomic data will be constructed to find out which parts of the genome are likely to respond to local selection pressures and random forces such as drift. Is it the case that local populations become divergent throughout the genome (as predicted by drift) or at key loci (as predicted by selection)? As such, the project aims to tackle these questions from an empirical as well as a theoretical perspective.