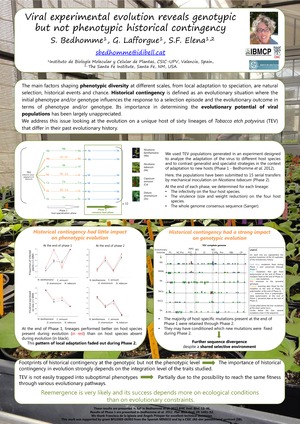 The importance of historical contingency in determining the evolvability of virus has been largely unappreciated. Identifying the constraints imposed by past adaptation is, however, of importance for understanding the evolution of host usage dynamics by multi-host viruses or the emergence of escape mutants that persist in the absence of antiviral treatments. To address this issue, we undertook an experimental evolution approach. Sixty lineages of Tobacco etch potyvirus that differ in their past evolutionary history and degree of adaptation to Nicotiana tabacum, and thus in their position on the adaptive landscape, were allowed to adapt to this host for 15 rounds of within host multiplication and transfer. The degree of adaptation to the new host as well as to the original ones was evaluated and the consensus sequence of each evolved lineage was obtained. Past evolutionary history did not determine the phenotypic outcome of this common host evolution phase. By contrast, historical contingency left footprints at the genotypic level: the majority of host-specific mutations present at the beginning of this experiment were retained in the end-point populations and may have affected which new mutations were consequently fixed. Further divergence between the sequences occurred despite a shared selective environment. Our results imply that viruses are not easily trapped into suboptimal phenotypes and that TEV (re)emergence is not evolutionarily constrained.

Horizontal gene transfer is a powerful mechanism by which antibiotic resistance spread among species. However, the maintenance of a horizontally transferred antibiotic resistance gene is not granted, because of its low level of adaptation to the receiving organism. In particular, transferred genes usually have codon preferences that differ from the ones of the receiving genome. This leads to translation errors, low translation rates and finally to low activity of the transferred gene and energetic costs for the receiving cell. It is theoretically predicted that a deoptimized codon usage gene will undergo an amelioration process - i.e. its sequence will evolve towards a codon usage similar to the host one - and a fine tuning of its expression and of the expression of interacting genes. To test these predictions, three synonymous versions of the Chloramphenicol Acetyl Transferase with different codon preferences were designed and transfected in Escherichia coli. After verifying that unadapted codon usage induced a fitness cost, we experimentally evolved these populations for 1000 generations. At the phenotypic level, the cost of codon usage deadaptation was totally compensated. However, at the genotypic level, no amelioration process was observed but various genetic changes occurred ranging from mutations in the promoter to gene loss to plasmid copy number reduction and to genetic changes in the bacteria chromosome. At the proteome level, the presence of a codon usage biased gene and the posterior evolution affected the expression of a high number of proteins. Our results suggest that the presence of horizontally transferred gene with a different codon usage induces selection pressures leading to a refactorization of the bacterial functioning. Horizontal transfer of antibiotic resistance gene thus reveals itself, not only as a spreading highway for these genes but also as a powerful mechanism pushing bacteria to explore new ways of functioning.