Maintaining immunocompetence under inbreeding: the case of a selfing vertebrate 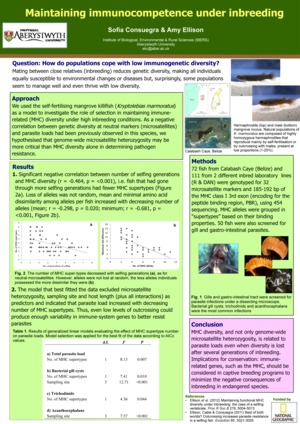 Mating between close relatives (inbreeding) reduces genetic diversity, making all individuals equally susceptible to environmental changes or diseases but, surprisingly, some populations seem to manage well and even thrive with low diversity. We have investigated how populations cope with low genetic diversity in a unique self-fertilising vertebrate (the mangrove killifish; Kryptolebias marmoratus). Our work shows how maintaining genetic diversity in some parts of the genome (i.e. the immune-related MHC genes) can be particularly important in terms of survival of the species. Hermaphrodite mangrove killifish have high rates of inbreeding and are genetically very homogeneous, but are also able to outcross, thereby introducing new genetic diversity. By comparing genetic diversity at neutral parts of the genome (microsatellites), immune-related genes (MHC) and parasites between wild and laboratory reared fish, we found that those individuals that had undergone more generations of self-fertilization had lower MHC and microsatellite diversity, and carried more parasites. But we also found evidence that the distribution of MHC alleles was not random, suggesting that even few divergent alleles could offer a selective advantage, potentially helping to fight a wider array of pathogens. Thus, even low levels of outcrossing could produce enough variability in immune-system genes to better resist parasites. This research has an important implication for conservation: immune-related genes, such as the MHC genes, need to be considered in captive breeding programs to minimize the negative consequences of inbreeding in endangered species.