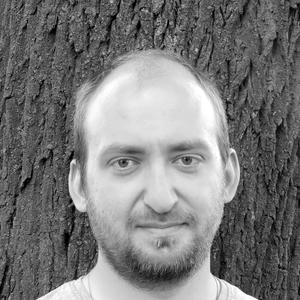 Morphological traits usually are strongly genetically determined, which results in relatively high heritabilities of such traits compared to life-history traits. However, apart from their genetic background, different phenotypic traits may be correlated at the genetic level with other traits. Such correlations - if strong - may hamper or strengthen evolution of pairs of traits, depending on the direction of genetic correlations. Here we analyse morphological traits such as body weight and structural body size from a long-term study of the wild population of blue tits. We measured morphological traits during the early development of nestlings at several points in time. By employing animal models we were able to estimate genetic and non-genetic sources of variance in these traits and covariances between different traits. We demonstrate that the magnitude of correlations between analogous traits expressed at different ages varies, indicating that different sets of genes influence expression of these traits at different ages. Our results indicate that traits expressed during development are not genetically uniform but have their internal, complex quantitative genetic architecture.

Reproductive performance differs between individuals depending on their condition status and individual quality. It is also shaped by external factors and, moreover may change with progressing age. Both within-individual changes and lifetime reproductive strategies differ between species and one factor shaping it is longevity. Short- and long-lived species are subjected to different constraints influencing not only their reproductive strategies but even possibilities for these strategies. I have analyzed possible mechanisms behind age-related changes in reproductive performance and lifetime reproductive success (LRS) in two passerine species. The short-lived Collared flycatcher (Ficedula albicollis) shows strong selection against poor breeders at early ages and quality/longevity-dependent LRS. LRS in the long-lived Siberian jay (Perisoreus infaustus), is dependent on social status and at least some individuals seem to be able to compensate for initial lower quality by delaying reproduction. Thus, the available strategies of shaping reproductive performance appear to differ between species dependent on their longevity.

Avian malaria parasites and paternity in the blue tit

Monogamous bird species commonly adopt extra-pair mating as an alternative reproductive strategy. Since such behavior is potentially associated with very high costs in terms of desertion by the social male, it should be balanced by benefits, which may be either of direct or indirect origin. In the latter case, females may benefit from engaging in mating outside the pair bond if extra-pair males pass to the offspring genes of superior quality. One of the main determinants of individual quality is resistance to parasites. Therefore, if the social mate of the female is parasitized, she might be willing to seek resistance genes for her offspring through matings with other males. However, despite the strong theoretical prerequisites, robust empirical data verifying this prediction is lacking. Here, we test this hypothesis using infection status with malaria parasites as an index of genetic resistance. Blood parasites causing avian malaria (genus Plasmodium and Haemoproteus) are widespread among passerine birds and they may negatively affect fitness of the host by either reducing survival or reproductive success. We verified whether the occurrence of extra-pair offspring in the brood was related to infection status with avian malaria parasites of the social father in the wild blue tit (Cyanistes caeruleus) population characterized by relatively high frequency of extra-pair matings (40% of nests contain at least 1 extra-pair offspring) and approximately 60% infection rate with malaria parasites among adult males and females. Additionally, we examined whether the occurrence of extra-pair young is affected by infection status of the mother and the interaction between the infection status of both social parents.