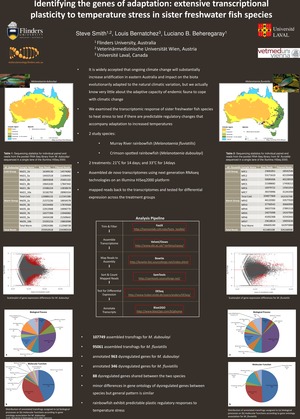 Identifying genes of adaptive significance in a changing environment is a major focus of ecological genomics. Such efforts were restricted, until recently, to researchers studying a small group of model organisms or closely related taxa. With the advent of next generation sequencing (NGS), genomes and transcriptomes of virtually any species are now available for studies of adaptive evolution. We experimentally manipulated temperature conditions for two species of Australian rainbowfish (Melanotaenia duboulayi and M. fluviatilis) and measured differences in RNA transcription between control and high temperature groups. These nonmigratory species are found across a latitudinal thermal gradient in nonoverlapping areas of eastern Australia and are predicted to be negatively impacted by ongoing environmental and climatic change. Using next generation RNAseq technologies on an Illumina HiSeq2000 platform, we assembled a de novo transcriptome, mapped reads back to this transcriptome and tested for differential expression across the treatment groups. Quality of the assembly was high with a N50 length of 1856 bases. Of the 107,749 assembled contigs, we identified 4251 that were differentially expressed according to a consensus of four different mapping and significance testing approaches. Once duplicate isoforms were removed, we were able to annotate 614 up-regulated transfrags and 349 that showed reduced expression in the higher temperature group. Annotated blast matches reveal that differentially expressed genes correspond to critical metabolic pathways previously shown to be important for temperature tolerance in other fish species. Interestingly, the two sister species returned a similar list of differentially expressed genes. Our results indicate that rainbowfish exhibit predictable plastic regulatory responses to temperature stress and the genes we identified provide excellent candidates for investigations of population adaptation to increasing temperatures.