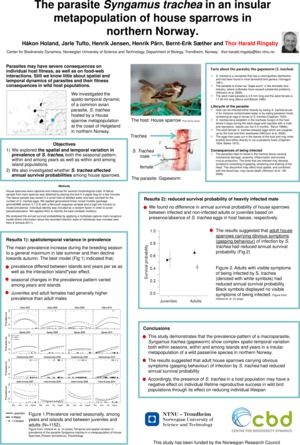 When investigating parasite-host dynamics in wild populations, a fundamental parameter to investigate is prevalence. This quantifies the percentage of individuals infected in the population. Investigating how prevalence changes over time and space can reveal interesting aspects in the parasite-host relationship in natural populations. We investigated the dynamic between a common avian parasite (Syngamus trachea) in a host metapopulation of House Sparrows (Passer domesticus) on the coast of Helgeland in northern Norway. We found that parasite prevalence varied in both time and space. In addition, the parasite prevalence was found to be different between demographic groups in the local populations. Our results reveal just how complex the dynamic between a host and its parasite may become in a fragmented landscape. Although temperature may be an important factor, the specific mechanisms causing this complexity are not fully understood, but needs to be further examined to understand how parasite-host interactions may affect the ecological and evolutionary dynamics and viability of host populations.

Translocations are increasingly used in conservation programmes to reinforce small populations. Success of translocations in relation to characteristics of the species, the location or the translocation event, such as propagule size, is well studied. However, much less is known about individual variation in genetic contribution to the release population. Here, we compare sex-specific fitness of resident and introduced individuals based on genetic parentage, following a translocation experiment in house sparrows. The genetic mating pattern revealed assortative mating based on origin, where introduced males were highly unlikely to mate with resident females. Introduced males had fewer mates and fledglings than resident males. Origin had no effect on number of fledglings in females. The effect of origin on number of fledglings was sex-specific as indicated by the significant interaction between sex and origin. The number of recruits and total annual fitness contribution did not differ between resident and introduced individuals. In the house sparrow, male badge size has a function in intra- and intersexual selection. It is likely that the influence of badge size is of greater importance for introduced males, which have to compete with resident males over nest sites and mates. However, the relationship between number of mates and badge size did not differ between resident and introduced males. Still, the effect of badge size on number of fledglings was stronger in introduced males. Our results provide insights about sex-specific individual heterogeneity in reproductive success of introduced individuals, and the potential role of sexually selected traits for the genetic consequences of a translocation event.