CONSTANS is highly prone to natural selection in Arabidopsis lyrata 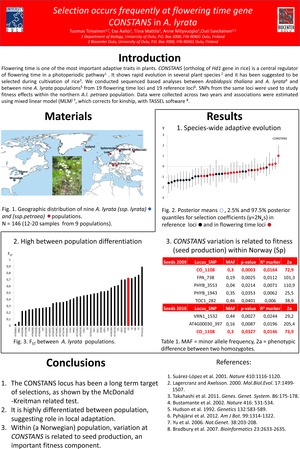 We examined the evolution and diversity of genes related to flowering time, an important adaptive trait in plants, and a set of unrelated reference genes in the perennial Arabidopsis lyrata in several populations in Europe and North America. Among the 38 loci, CONSTANS, one of the central flowering time genes, was the only which had experienced species-wide adaptive evolution when compared to A. thaliana, as shown by multilocus MK analysis. This was consistent with earlier result of selection on this gene in A. thaliana (Bustamante et al. 2002), and of the rapid evolution of this gene in Brassicaceae (Lagercranz & Axelsson 2000). The CONSTANS gene also was highly differentiated between the widespread A. lyrata populations (Fst=0.78). Further, an association analysis suggested a role in governing fitness in an experimental field site at the University of Oulu. Thus, we found CONSTANS gene to be adaptively important in all studied time levels of natural selection. Likely selection on flowering time, may often target the CONSTANS gene.