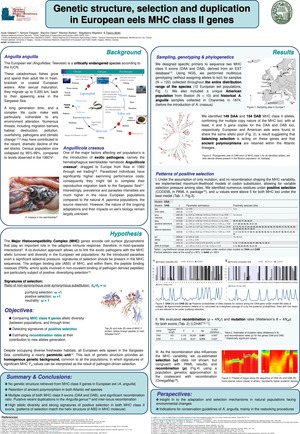 Understanding adaptation and selection in populations facing environmental changes is a major concern. Our project aims to understand the adaptation and resilience of endangered catadromous European eel to increasing parasitic pressure. Anguilla anguilla has encountered successive waves of exotic invasive parasites, namely, the swimbladder nematode Anguillicoloides crassus. Infested individuals have high swimming performance costs; and might fail to complete the reproductive migration back to the Sargasso Sea. Prevalence of such parasites is much higher in the naive European populations compared to native Japanese hosts. However, the nature of the ongoing adaptation and impact on eel’s biology remain largely unknown. Given the role of Major Histocompatibility Complex (MHC) genes in host–parasite interactions, we designed specific primers to sequence 2 class II exons. Using NGS, we sampled alleles from 12 European populations (N = 120) collected throughout the species distribution range, as well as from one American population (N=10). Additional historical samples (1874) from Charente were included. Our results indicate success in isolating relevant MHC class II genes; we identified respectively 149 and 154 DAA and DAB MHC class II alleles. The multiple copy nature of the MHC loci was confirmed, with at least 4 and 5 gene copies for DAA and DAB loci, respectively. European and American eels were found to share the same allelic pool, a result in sharp contrast with microsatellite data, suggesting that balancing selection is acting on these genes while ancient polymorphisms is retained within the Atlantic lineages. There was no evidence for temporally fluctuating selection pressure. Finally, the eel MHC class II exons appeared to be under positive selection and at the upper range of rho and omega values in teleosts. These results suggest that recent duplications occurred in the genus that might have facilitated inter-locus recombination and high allelic diversity.

Anguilla sp. dispersal and putative spawning areas have divided the scientific community for decades. The rise of the Atlantic species is an unsolved question for which the most supported hypotheses are incompatible: either A. anguilla and A. rostrata came through the Tethys Corridor (closed ~30Mya) or through the Panama Isthmus (open until ~3 Mya). Our study focuses on reconstructing the evolutionary history of freshwater eels. The goal is to ascertain the global demographic dynamics through time for species from the major oceanic basins. Our analyses include TMRCA and diversity calculations, neutrality tests and molecular clock calibration. Using Sanger technology, we sequenced 5 mitochondrial markers, for a total of 304 fish from 10 species. With Bayesian coalescent inference, we estimated genealogies, branch lengths, substitution model parameters and population parameters through time. To infer the timing of demographic events and attach a real-time scale, we used prior information available in the literature. The estimated mutation rate (1.82E-9/bp.yr) and nodes ages were similar to widely accepted reports based on much smaller data sets. However, our results clearly favor the Panama Isthmus route hypothesis over the most popular Tethys route scenario for the settling of the Atlantic eels. Although most species are outside safe ecological limits, we detect genetic signatures of expansion in nearly all sampled populations (10 to 100 fold increases of Ne). These expansions (~400 000 to 720 000 ya) succeeded the mid-Pleistocene transition, a major change in glacial-interglacial cycles. Post-MPT warmth yielded a re-organization of the ocean circulation at intermediate depth and the egress of low-frequency variability in Paciﬁc surface temperatures, impelling a demographic rise. The reported severe decline calls for a better hold of the impact of climate and anthropogenic factors on the resilience potential of these fascinating catadromous fish.